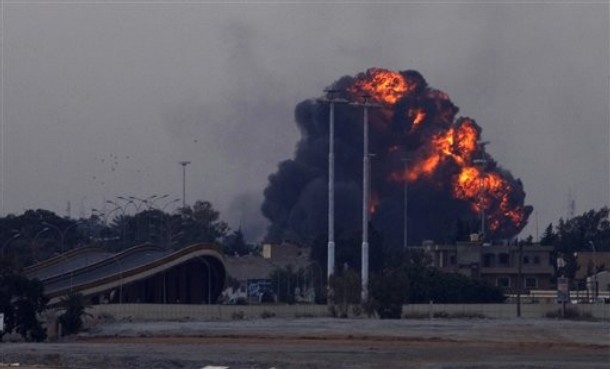 From the AP:  China on Sunday expressed "regret" over punishing airstrikes by the U.S. and European nations against Libya to enforce a U.N. no-fly zone.

Foreign Ministry spokeswoman Jiang Yu said China "consistently disagrees with the use of force in international relations" and expressed "regret" over the Saturday attacks.

In a statement posted on the ministry’s website, Jiang said China "hopes the situation in Libya resumes stability as soon as possible" in order to avoid escalation of a military conflict.

From the Canadian Press: Russia’s government says it regrets the start of an international military operation against Moammar Gadhafi’s forces.

The Russian Foreign Ministry says in a statement that "Moscow notes with regret this armed action, taken in conjunction with the hastily approved U.N. Security Council resolution" allowing a no-fly zone over Libya.  (photo: AP)