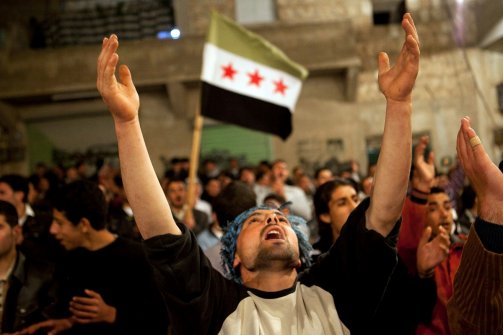 From Niall Ferguson, Newsweek:  [W]hy should it be the United States that once again attempts to play the part of global cop? . . .

[W]hat is the point of humanitarian intervention in a region where no good deed goes unpunished? The United States has made its fair share of mistakes in the Middle East, no question. But the things we have gotten right—extricating Egypt from the Soviet embrace, upholding Kuwait’s independence from Iraq, overthrowing the tyrants Saddam Hussein and Muammar Gaddafi—haven’t exactly won many plaudits. Back in 2002, according to the Pew Global Attitudes survey, 30 percent of Turks and 25 percent of Jordanians had a favorable view of the United States. Today those figures are, respectively, 15 percent and 12 percent. . . .

In terms of geopolitics, China today is the world’s supreme free rider. China’s oil consumption has doubled in the past 10 years, while America’s has actually declined. As economist Zhang Jian pointed out in a paper for the Brookings Institution last year, China relies on foreign imports for more than 50 percent of the oil it consumes, and half of this imported oil is from the Middle East. (China’s own reserves account for just 1.2 percent of the global total.)

Moreover, China’s dependence on Middle Eastern oil is set to increase. The International Energy Authority estimates that by 2015 foreign imports will account for between 60 and 70 percent of its total consumption. Most of that imported energy comes through a handful of vital marine bottlenecks: principally, the straits of Hormuz and Malacca and the Suez Canal. . . .

Finally, the world is ready for the Chinese to participate more fully in international security. According to another Pew survey of 14 nations around the world, 42 percent of people now think China is the world’s leading economic power, compared with 36 percent who think it’s still the United States.

Under President Obama, U.S. grand strategy has been at best incoherent, at worst nonexistent. I can think of no better complement to the president’s recent “pivot” to the Asia-Pacific region than to invite China to play a greater role in the Middle East—one that is commensurate with its newfound wealth and growing military capability.

Niall Ferguson is a professor of history at Harvard University. He is also a senior research fellow at Jesus College, Oxford University, and a senior fellow at the Hoover Institution, Stanford University. His Latest book, Civilization: The West and the Rest, has just been published by Penguin Press.  (photo: D. Leal Olivas/AFP-Getty)