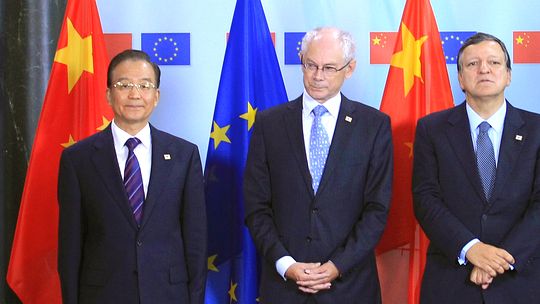 From Andrew Rettman, EUobserver:  Chinese leader Wen Jiabao has bluntly told the EU to drop its ban on arms sales.

He made the call in his opening remarks to top EU officials Herman Van Rompuy and Jose Manuel Barroso at a summit in a stately home in Brussels on Thursday (20 September).

"I have to be frank with you in saying this – on the issue of lifting the arms embargo on China and recognising China’s full market economy status. We have been working hard for 10 years [on this] but the solution has been elusive. I deeply regret this. I hope and I do believe that the EU side will seize the opportunity and take the right initiative at an early stage to resolve these issue," he said. . . .

The EU imposed the arms ban on humanitarian grounds after the 1989 Tiananmen Square massacre.

Amid talk of a merger between EU arms firms BAE Systems and Eads to create the world’s largest weapons maker, the EU embargo also has strategic implications on arms technology transfer.

EU officials have in the past voiced sympathy for dropping the ban.

"The current arms embargo is a major impediment for developing stronger EU-China co-operation on foreign policy and security matters. The EU should assess its practical implication and design a way forward," EU foreign policy chief Catherine Ashton said in an internal EU paper back in 2010.

The ban is already being flouted in practice.

According to EU documents, the lion’s share came from France and the UK for aircraft and ground vehicle parts, electronic equipment, missiles and over €13 million of: "Chemical or biological toxic agents, ‘riot control agents,’ radioactive materials."  (photo: Zeit)