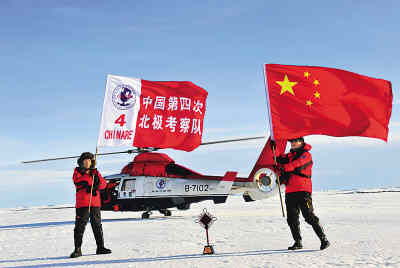 From Linda Jakobson and Jingchao Peng, Stockholm International Peace Research Institute (SIPRI):  Although several non-Chinese observers have described China’s actions in the Arctic as ‘more assertive’, China’s Arctic policies are still in a nascent stage of formulation. China has not published an Arctic strategy and is not expected to do so in the near- to medium-term.

Despite its low-key approach to the Arctic, the Chinese Government has, over the past five years, indeed taken steps to protect what it perceives as its key interests in the Arctic. These steps are, first, to strengthen its capacity to respond appropriately to the effects that climate change in the Arctic will have on food production and extreme weather in China; second, to secure access, at reasonable cost, to Arctic shipping routes; and third, to strengthen China’s ability as a non-Arctic state to access Arctic resources and fishing waters.

While China recognizes that it is an ‘Arctic outsider’ without sovereign rights in the Arctic, China sees numerous economic opportunities opening up in the Arctic. Consequently, it wants to be part of the Arctic order and influence discussions and decisions on how the Arctic should be governed. It is keen to become a permanent observer of the Arctic Council. Although permanent observers do not have voting rights, they automatically receive an invitation to Arctic Council meetings and activities. China presumably seeks the assurance that it would not be excluded from Arctic Council activities in the future and hopes that over time observers will have more sway over decisions taken by the council.

Chinese Government officials emphasize the global, rather than regional, implications of the melting ice. This is noteworthy because China, as a rising global power, rejects the notion that the Arctic states alone should decide Arctic issues because many non-Arctic states, China among them, will be affected by the Arctic’s changing environment. Chinese analysts today refer to China as a ‘near-Arctic state’ and an ‘Arctic stakeholder’.

Moreover, China is concerned that the international waters of the Arctic, in which the 1982 United Nations Convention on the Law of the Sea (UNCLOS) grants all states the right to explore and extract resources, will shrink considerably if all the claims by the Arctic states to outer-continental shelves are deemed legal. China will continue to stress the need for Arctic states to ensure a balance between their own interests and the common interests of the international community. . . .

Regardless of the increase in funding by the Chinese government for Arctic research and an increasing awareness among government officials of the opportunities that the Arctic future holds, the Arctic is not destined to be a priority of China’s foreign policy. The visits in 2012 by Chinese senior leaders to several Nordic countries cannot merely be interpreted as Arctic-related efforts. In recent years China’s diplomacy has generally focused on strengthening ties with diverse countries, especially those with strong technological capabilities.

Because of China’s insistence on respect for sovereignty and its preoccupation with staunchly defending its perceived sovereign rights in the South and East China seas, China can be expected to continue to respect the sovereign rights of the Arctic littoral states. In the near- to medium-term it is hard to envision China being genuinely assertive in the Arctic—despite suspicions of other countries.  (photo: Georgia Political Review)  (via Real Clear World)