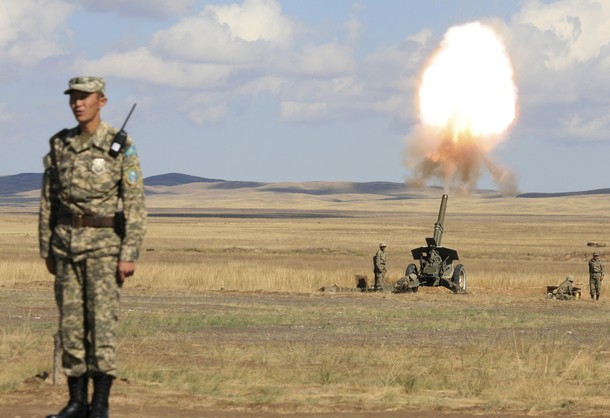 More than 3,000 troops will take part in the exercises. Almost a third of them are Chinese, underlining Beijing’s growing clout in the former Soviet republics of central Asia, a region Moscow still sees as within its sphere of influence.

The "Peace Mission 2010" exercises are the largest in three years involving the Shanghai Cooperation Organisation (SCO), a six-nation group led by Moscow and Beijing that some analysts say might one day become a counterweight to NATO. …

"Now and for the next few years, terrorism, separatism and extremism will remain serious factors in the stability of this region and the world," Ma Xiaotian, deputy chief of staff of the Chinese armed forces, said at a ceremony to open the exercises. …

China’s growing clout in central Asia is underpinned by billions of dollars in investment in the region’s oil, natural gas and metals reserves. Beijing has also issued loans to several different countries in the region.

"All of this is circumventing Russia, especially in energy and economics, but subsequently also in political clout," said Lieutenant Colonel Marcel de Haas, senior military research fellow at the Netherlands Institute of International Relations Clingendael.

China, Russia and Kazakhstan each sent 1,000 troops to the exercises, which are taking place at the Matybulak military range in southern Kazakhstan, about 200 km (125 miles) west of Kazakhstan’s commercial capital and largest city, Almaty.

Tajikistan and Kyrgyzstan each sent 150 troops, the ministry said. Uzbekistan was invited, but said it would not send troops.  (photo: Reuters)