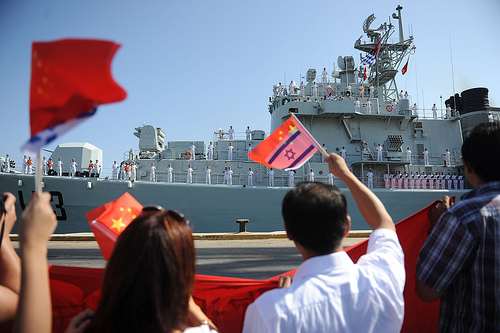 From the Times of Israel:  Three Chinese warships are in Haifa Port as part of a four-day goodwill visit marking 20 years of Sino-Israeli diplomatic relations — the first time Chinese naval ships have docked in Israel.

The visit, which includes tours and celebratory events, comes amid reports of strengthening military and diplomatic ties between China and Israel. China is a top Israeli trading partner but military ties suffered over the last decade, in part because the US aborted Israel’s sale of reconnaissance aircraft to Beijing.

Three months ago, Israel Defense Forces Chief of the General Staff Lt. Gen. Benny Gantz visited China as part of an initiative to boost military relations. It was the first visit of an IDF chief since 1968, and aimed to strengthen ties amid Beijing’s growing interests in the Mediterranean and Middle East regions.

The visiting flotilla — the “Qingdao” guided missile destroyer, “Yantai” guided missile frigate and “Weishan Lake” comprehensive supply ship — is part of the 11th Chinese naval escort task force of the Chinese Navy. It is under the direction of rear Adm. Yang Junfei, deputy commander of China’s fleet in the North China Sea, the highest-ranking Chinese officer ever to pay an official visit to Israel. . . .

From Xinhua:  The flotilla finished in July its four-month international escort mission in the Gulf of Aden and Somali waters, after having escorted 184 ships in 43 operations. A total of 126 pirate vessels in 58 incidents were successfully driven away by the warships.  (photo: Algemeiner)