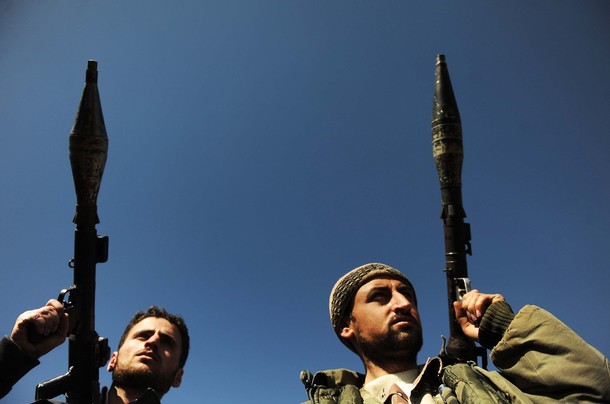 From Eric Schmitt, the New York Times:  A small number of C.I.A. officers are operating secretly in southern Turkey, helping allies decide which Syrian opposition fighters across the border will receive arms to fight the Syrian government , according to American officials and Arab intelligence officers.

The weapons, including automatic rifles, rocket-propelled grenades, ammunition and some antitank weapons, are being funneled mostly across the Turkish border by way of a shadowy network of intermediaries including Syria’s Muslim Brotherhood and paid for by Turkey, Saudi Arabia and Qatar, the officials said.

The C.I.A. officers have been in southern Turkey for several weeks, in part to help keep weapons out of the hands of fighters allied with Al Qaeda or other terrorist groups, one senior American official said. The Obama administration has said it is not providing arms to the rebels, but it has also acknowledged that Syria’s neighbors would do so.

The clandestine intelligence-gathering effort is the most detailed known instance of the limited American support for the military campaign against the Syrian government. It is also part of Washington’s attempt to increase the pressure on President Bashar al-Assad of Syria, who has recently escalated his government’s deadly crackdown on civilians and the militias battling his rule. With Russia blocking more aggressive steps against the Assad government, the United States and its allies have instead turned to diplomacy and aiding allied efforts to arm the rebels to force Mr. Assad from power.

By helping to vet rebel groups, American intelligence operatives in Turkey hope to learn more about a growing, changing opposition network inside of Syria and to establish new ties. “C.I.A. officers are there and they are trying to make new sources and recruit people,” said one Arab intelligence official who is briefed regularly by American counterparts.

American officials and retired C.I.A. officials said the administration was also weighing additional assistance to rebels, like providing satellite imagery and other detailed intelligence on Syrian troop locations and movements. The administration is also considering whether to help the opposition set up a rudimentary intelligence service. But no decisions have been made on those measures or even more aggressive steps, like sending C.I.A. officers into Syria itself, they said.

The struggle inside Syria has the potential to intensify significantly in coming months as powerful new weapons are flowing to both the Syrian government and opposition fighters. President Obama and his top aides are seeking to pressure Russia to curb arms shipments like attack helicopters to Syria, its main ally in the Middle East. . . .

What has changed since March is an influx of weapons and ammunition to the rebels. The increasingly fierce air and artillery assaults by the government are intended to counter improved coordination, tactics and weaponry among the opposition forces, according to members of the Syrian National Council and other activists.

Last month, these activists said, Turkish Army vehicles delivered antitank weaponry to the border, where it was then smuggled into Syria. Turkey has repeatedly denied it was extending anything other than humanitarian aid to the opposition, mostly via refugee camps near the border. The United States, these activists said, was consulted about these weapons transfers. . . .

About 10 military coordinating councils in provinces across the country are now sharing tactics and other information. The city of Homs is the notable exception. It lacks such a council because the three main military groups in the city do not get along, national council officials said.  (photo: Getty)