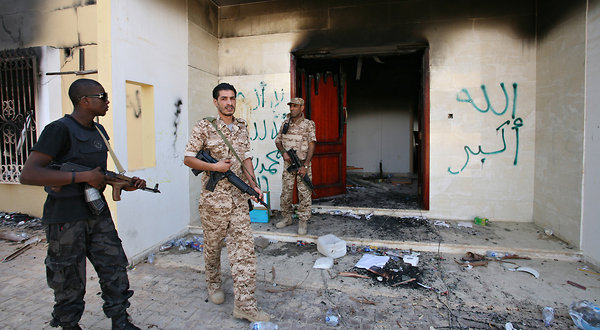 From David Ignatius, Washington Post:  A detailed CIA timeline of the assault on U.S. facilities in Benghazi:

●9:40 p.m.: A senior State Department security officer at the U.S. Consulate in Benghazi called the CIA base, at an annex about a mile away, and requested assistance: “The compound is under attack. People are moving through the gates.” CIA officers at the base can hear the alarm, and a team immediately begins gathering weapons and preparing to leave. . . .

●10:40 p.m.: Members of the CIA team enter the burning inferno of “Villa C,” where Ambassador Christopher Stevens is believed to be hiding. CIA officers try numerous times to reach the “safe room” but are driven back by the intense smoke and fire. Small-arms fire continues from the Libyan attackers.

●11:11 p.m.: An unarmed military Predator drone arrives over the compound to provide aerial reconnaissance. The drone had been diverted from a mission over Darnah, about 90 minutes away. But without weapons, it can’t help much. . . .

●11:56 p.m.: CIA officers at the annex are attacked by a rocket-propelled grenade and small arms. Sporadic attacks continue for about another hour. The attacks stop at 1:01 a.m., and some assume the fight is over.

●1:15 a.m.: CIA reinforcements arrive on a 45-minute flight from Tripoli in a plane they’ve hastily chartered. The Tripoli team includes four GRS security officers, a CIA case officer and two U.S. military personnel on loan to the agency. They don’t leave the Benghazi airport until 4:30 a.m. The delay is caused by negotiations with Libyan authorities over permission to leave the airport; obtaining vehicles; and the need to frame a clear mission plan. The first idea is to go to a Benghazi hospital to recover Stevens, who they rightly suspect is already dead. (Also killed was a State Department communication specialist.) But the hospital is surrounded by the al-Qaeda-linked Ansar al-Sharia militia that mounted the consulate attack.

●5:04 a.m.: The team from Tripoli arrives at the CIA base. Glen Doherty, one of the GRS men from Tripoli, goes to the roof and joins [Tyrone] Woods in firing positions.

●5:15 a.m.: A new Libyan assault begins, this time with mortars. Two rounds miss and the next three hit the roof. . . . At 5:26 the attack is over. Woods and Doherty are dead and two others are wounded.

●6 a.m.: Libyan forces from the military intelligence service finally arrive, now with 50 vehicles. They escort the Americans to the airport. A first group of 18, including two wounded, depart at 7 a.m. A second group of 12, plus the four dead, leave at 10 a.m. for Tripoli and then the long flight back to America.

From Eric Schmitt, New York Times:  Despite the new details, many questions surrounding the attack remain unanswered, including why the State Department did not increase security at the mission amid a stream of diplomatic and intelligence reports that indicated that the security situation in Benghazi and around Libya had deteriorated sharply since the United States reopened its embassy in Tripoli last year.

By underscoring the C.I.A.’s previously unpublicized role in mobilizing the evacuation effort, the officials seemed to be implicitly questioning the State Department’s security arrangements in Benghazi, a focus of three Congressional inquiries into the attack on the mission.  (photo: Mohammad Hannon/AP)