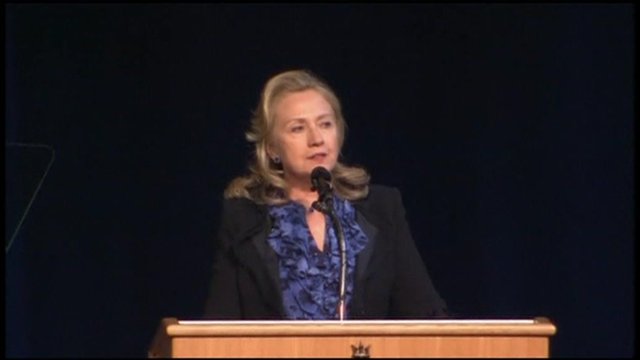 From Hillary Clinton, the Department of State:  [W]e’re not turning away from our old friends and interests in other parts of the world. Our relationships with European and NATO allies who are, after all, our partners of first resort, remain indispensable for our work around the globe. And we need to deepen our engagement in the Asia Pacific region in coordination with them.

So just as we are not losing old friends, we are not seeking new enemies. Today’s China is not the Soviet Union. We are not on the brink of a new Cold War in Asia. Just look at the ever expanding trade between our economies, the connections between our peoples, the ongoing consultations between our governments. In less than 35 years, we’ve gone from being two nations with hardly any ties to speak of to being thoroughly, inescapably interdependent. That requires adjustments in thinking and approaches on both sides. Geopolitics today cannot afford to be a zero-sum game. A thriving China is good for America and a thriving America is good for China, so long as we both thrive in a way that contributes to the regional and global good. Let me go one step further. We will only succeed in building a peaceful, prosperous Asia Pacific if we succeed in building an effective U.S.-China relationship. . . .

History shows us that a strong regional architecture can bring to bear incentives for cooperation and disincentives for provocation and problematic behaviors. But this kind of architecture does not just spring up on its own, just as NATO and other aspects of the post-World War II architecture didn’t just happen. It takes consistent effort, strong partnerships, and crucially, American leadership. And that is, at core, what our strategy in the Asia Pacific is all about. All of our actions – diplomatic, economic, and military – are designed to advance this goal. . . .

The extraordinary service and sacrifice of America’s men and women in uniform makes a difference in the lives of people all over the world. In this region, it made a difference in the lives of those people in the Japanese community rescued from the floodwaters, or to the Singaporean sea captain protected from pirates, or the Korean family shielded from aggression. When it comes to ensuring stability and security in the Asia Pacific and beyond, there is simply no substitute for American power. Only the United States has the global reach, the resources and the resolve to deter aggression, rally coalitions, and project stability into diverse and dynamic areas of danger, threat, and opportunity.

Now this is not 1912, when friction between a declining Britain and a rising Germany set the stage for global conflict. It’s 2012, and a strong America is welcoming new powers into an international system designed to prevent global conflict. . . .

One day soon, you, too, will leave this place and board ships, submarines, and aircraft bound for distant seas. Some of you will sail the Atlantic, renewing old bonds and defending old friends. Others will head to the Pacific to face the challenges of a new time. Wherever you go, you will represent the pride and power of this great nation we cherish. And you will embody our hopes for a freer, more peaceful, and prosperous world.  (photo: BBC)