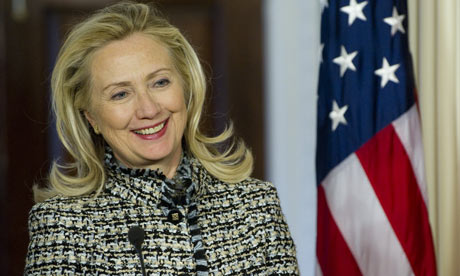 From Hillary Rodham Clinton, Department of State:  Perhaps the most important question in the years ahead will be whether we invest as much energy into our economic relationship as we have put into our security relationship. At a time when countries are measuring their influence as much by the size of their economies as by the might of their militaries, we have to realize the untapped potential of the transatlantic market. This is as much a strategic imperative as an economic one.

After all, so many of the things we do around the world depend on our economic strength – from providing defense, to investing in emerging markets, to aiding development, to responding to crises. And there may be no greater threat to our security and our transatlantic partnership than a weak economic future on one or both sides of the Atlantic. If we’re serious about strengthening our economic ties, we each need to build stronger foundations at home. For the United States, this means making tough political choices. It means investing in our own competitiveness to set the platform for stronger economic growth. And it means addressing our domestic fiscal challenges.

As you know, Washington is gearing up for another round of budget negotiations. And I am again hearing concerns about the global implications of America’s economic choices. And although I am now out of politics, let me assure you that for all the differences between our political parties here, we are united in our commitment to protect American leadership and bolster our national security. Reaching a meaningful budget deal is critical to both. This is a moment, once again, to prove the resilience of our economic system and reaffirm American leadership in the world.

And we are counting on Europe to do the same. First and foremost, that means resolving the Eurozone crisis. And we’ve seen some good progress recently. Over the summer, the European Central Bank announced that it would stand behind governments that are implementing critical reforms, which has effectively reduced borrowing costs for these countries. And a few weeks ago, Greece took an important step by passing a budget and reform package that makes tough trade-offs. And just this week, European governments and the IMF agreed on measures to reduce Greece’s debt burden.

Ireland and Portugal have implemented sweeping reforms that should improve their competitiveness. Spain and Italy are also on the path to reform and eventual recovery. This has not, of course, been easy, but after two years of vigorous debate and a dozen elections, the 17 governments of the Euro area remain united in their will to maintain Europe’s monetary union. Time and again, skeptical governments and crisis-weary voters have chosen to keep the Eurozone intact and to keep trying to resolve the crisis.

Now, we recognize that this is fundamentally a European problem that requires European solutions. America can’t and shouldn’t try to dictate any answer or approach. But even as the risks of financial crisis recede, I want to urge European leaders to keep working to address the challenge of economic growth and jobs. The Eurozone economy is slipping back into recession as austerity policies take effect. France and Germany, which have largely weathered the economic storm so far, are also beginning to show some signs of slowdown.

So it’s vital to the entire global economy that European leaders move toward policies that promote credible and sustainable growth and create jobs. But even as we’re making these tough choices on our own, there’s a great deal more on the economic front we can and must be doing together. Like tackling global imbalances, which are creating a drag on the recoveries in both America and Europe, and perhaps more importantly, working to strengthen our transatlantic trade relationship.

Now of course, Europe is already America’s largest trade and investment partner. And we have made some progress building on that. We have revitalized the Transatlantic Economic Council and set up the U.S.-EU Energy Council. We’ve broken down regulatory barriers and are working to establish standards, common standards, for manufacturing, and our collaboration with the private sector is starting to show results in developing smart grids and other new energy technologies.

But despite that progress, the United States remains one of only a handful of WTO members not to move beyond Most-Favored-Nation status with the EU. We need to do better. In the face of rising challenges to our shared economic model, and the growth of barriers to trade that have emerged not at borders but behind them, we need to continue to promote a rules-based order of open, free, transparent, and fair competition in the global marketplace.

That’s why we are discussing possible negotiations with the European Union for a comprehensive agreement that would increase trade and spur growth on both sides of the Atlantic. We have more work to do, including addressing longstanding barriers to trade and market access. But if we work at it and if we get this right, an agreement that opens markets and liberalizes trade would shore up our global competitiveness for the next century, creating jobs and generating hundreds of billions of dollars for our economies. So I hope we will continue working to find a way forward, and make stronger trade and investment ties a major strategic goal of our transatlantic alliance.