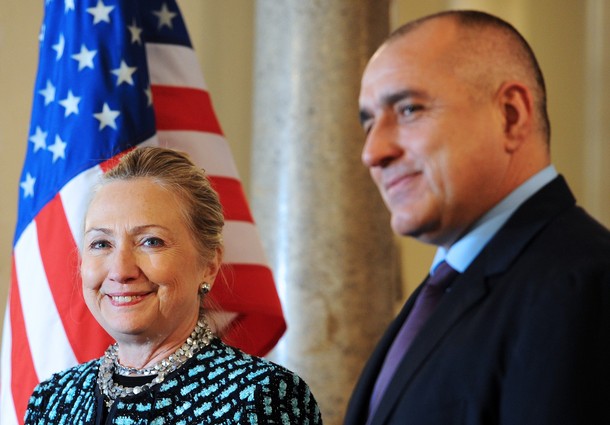 From Matthew Lee, AP:  U.S. Secretary of State Hillary Rodham Clinton called Sunday for "friends of democratic Syria" to unite and rally against President Bashar Assad’s regime, previewing the possible formation of a formal group of likeminded nations to coordinate assistance to the Syrian opposition.

Speaking in the Bulgarian capital of Sofia a day after Russia and China blocked U.N. Security Council action on Syria, Clinton said the international community had a duty to halt ongoing bloodshed and promote a political transition that would see Assad step down. She said the "friends of Syria" should work together to promote those ends. . . .

"Faced with a neutered Security Council, we have to redouble our efforts outside of the United Nations with those allies and partners who support the Syrian people’s right to have a better future," Clinton told reporters after meeting top Bulgarian officials.

Such a group could be similar, but not identical, to the Contact Group on Libya, which oversaw international help for opponents of the late deposed Libyan leader Moammar Gadhafi. However, in the case of Libya, the group also coordinated NATO military operations to protect Libyan civilians, something that is not envisioned in Syria. . . .

U.S. officials said a friends group would work to further squeeze the Assad regime by enhancing sanctions against it, bringing disparate Syrian opposition groups inside and outside the country together, providing humanitarian relief for embattled Syrian communities and working to prevent an escalation of violence by monitoring arms sales.

"We will work to expose those who are still funding the regime and sending it weapons to be used against defenseless Syrians, including women and children," Clinton said. "We will work with the friends of a democratic Syria around the world to support the opposition’s peaceful political plans for change. . . ."

Radwan Ziadeh, a prominent member of the opposition Syrian National Council said countries backing Assad’s foes should form an "international coalition … whose aim will be to lead international moves to support the revolution through political and economic aid."

He said he expected French, U.S. and Arab support for a coalition.  (photo: Getty)