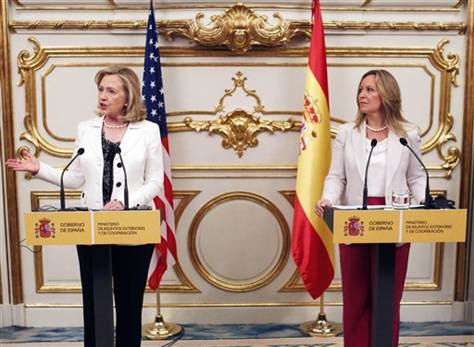 From Bradley Klapper, the AP:  The United States and Spain said Saturday they won’t let Moammar Gadhafi’s threats of retaliatory attacks in Europe deter their mission to protect Libyan civilians and force him to leave power after four decades of often unpredictable and sometimes violent rule.

"Instead of issuing threats, he should be putting the well-being and interests of his own people first," U.S. Secretary of State Hillary Rodham Clinton said. "He should step down from power."

Speaking in Spain on the last leg of a three-nation European tour, Clinton brushed aside Gadhafi’s brazen warning Friday that unless NATO halted air attacks against his regime, he would retaliate with attacks on civilians in Europe. . . .

It was unclear how Gadhafi would make good on his threats and despite his past backing for various militant groups, whether the latest outburst amounted to anything more than a political rallying cry from a leader given to outlandish rhetoric. He delivered his message by telephone from an unknown location.

Appearing alongside Spanish Foreign Minister Trinidad Jimenez at a news conference in Madrid, Clinton said Gadhafi must end military operations. She insisted that NATO’s mission to protect civilians was on track and that the pressure on Gadhafi to cede power was mounting.

"The rebels are gaining strength and momentum," Clinton said. "We need to see this through."

"We will continue exerting the same military and political pressure," she said, "to protect Libyan citizens from the threat and the use of military violence by Col. Gadhafi."  (photo: Andres Kudacki/AP)