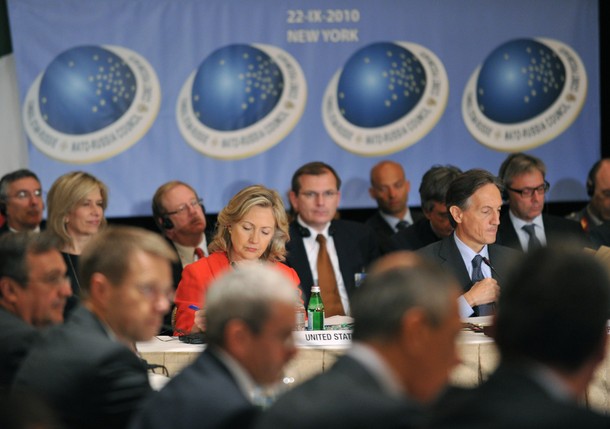 From Andrew Quinn, Reuters:  NATO and Russia should step up cooperation on missile defense, aiming to endorse a plan by November to resume missile defense exercises and explore ways to link early warning systems, U.S. Secretary of State Hillary Clinton said on Wednesday.

"In the longer term, NATO and Russia should work together to develop models for a combined NATO-Russia missile defense architecture," Clinton said in prepared comments at a NATO-Russia Council ministerial meeting in New York.

Repeating assurances the United States believes the 28-member Western security alliance, founded to counter the Soviet threat, and Russia should be partners, Clinton outlined a raft of issues the two sides should work on together …

Clinton said it was important for both sides to restore and eventually modernize the Conventional Forces in Europe (CFE) Treaty, from which Russia has suspended its participation.

Clinton said she was encouraged that Russia had welcomed NATO’s offer to begin discussing a framework for reviving the CFE, saying the new START nuclear arms treaty between the United States and Russia provided a model for how to achieve this kind of agreement.

"We must ensure that the initial framework commits us to addressing all the tough issues if we want the follow-on negotiations to be successful," she added.

NATO wants to highlight that the CFE principle of host nation consent for the stationing of forces on its territory applies to Georgia — which rejects the stationing of Russian troops in its breakaway regions.

"We must have real military limitations and restraints where we need them," Clinton said. "And all participating states, including Georgia and Moldova, must have the right to agree to the stationing of foreign forces on their sovereign territory."  (photo: Getty)