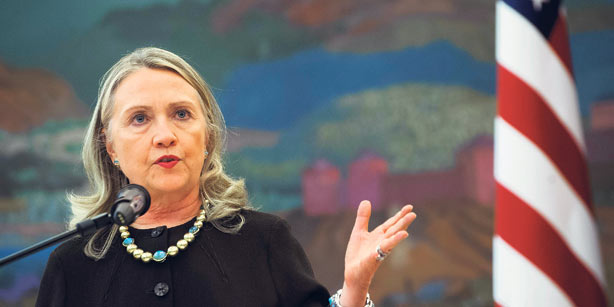 From Hillary Rodham Clinton, Department of State:  [W]e are working very hard with many different elements from the opposition – yes, inside Syria as well as outside Syria. Some of you might remember I hosted a meeting in New York during the UN General Assembly. We facilitated the smuggling-out of a few representatives of the Syrian internal opposition in order for them to explain to the countries gathered why they must be at the table. This cannot be an opposition represented by people who have many good attributes but have, in many instances, not been inside Syria for 20, 30, or 40 years. There has to be a representation of those who are on the frontlines, fighting and dying today to obtain their freedom.

And there needs to be an opposition leadership structure that is dedicated to representing and protecting all Syrians. It is not a secret that many inside Syria are worried about what comes next. They have no love lost for the Assad regime, but they worry, rightly so, about the future. And so there needs to be an opposition that can speak to every segment and every geographic part of Syria. And we also need an opposition that will be on record strongly resisting the efforts by extremists to hijack the Syrian revolution. There are disturbing reports of extremists going into Syria and attempting to take over what has been a legitimate revolution against a repressive regime for their own purposes.

So the Arab League-sponsored meetings, starting in Doha next week, will be an important next step. I have been constantly involved with my counterparts, both in the EU and in the Arab League, in particular with the hosts of the meeting next week in Qatar. We have recommended names and organizations that we believe should be included in any leadership structure. We’ve made it clear that the SNC can no longer be viewed as the visible leader of the opposition. They can be part of a larger opposition, but that opposition must include people from inside Syria and others who have a legitimate voice that needs to be heard. So our efforts are very focused on that right now.