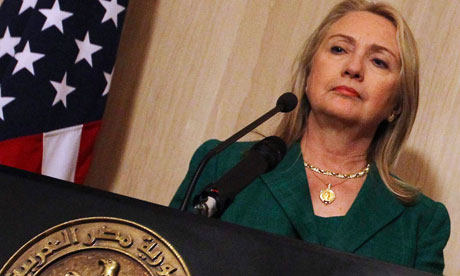 From Anne Gearan, Washinton Post:  The United States will not tolerate any use of chemical weapons in Syria and will act quickly if that threat appears imminent, Secretary of State Hillary Rodham Clinton said Monday.

"This is a red line for the United States," Clinton said. “I’m not going to telegraph in any specifics what we would do in the event of credible evidence that the Assad regime has resorted to using chemical weapons against their own people. But suffice to say we are certainly planning to take action."

Clinton did not directly address new reports that Syrian President Bashar al-Assad may be moving chemical weapons or making other possible preparations to use his known stockpile. She spoke in the Czech Republic, which is acting as the United States’ diplomatic agent in Syria since the U.S. Embassy there was shuttered. . . .

President Obama declared the Assad regime’s deployment or use of chemical weapons a "red line" for U.S. intervention in the Syrian civil war earlier this year. . . .

"There is no doubt there is a line between even the horrors they have already inflicted," on civilians, and the use of chemical weapons, Clinton said Monday.  (photo: Reuters)