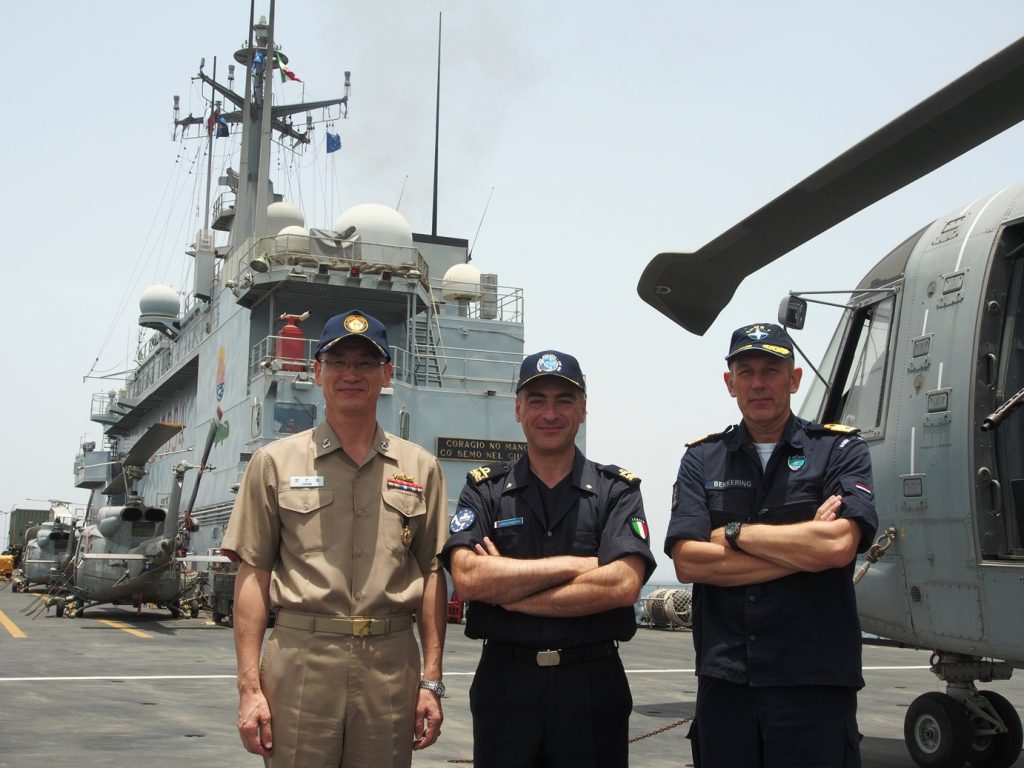 From EU NAVFOR:  On 24 August 2012 the Force Commanders from the EU Naval Force Somalia – Operation Atalanta (EU NAVFOR), NATO Operation Ocean Shield (TF-508) and Combined Task Force 151 (operated by the Combined Maritime Forces – CMF) met on board the EU NAVFOR flagship ITS San Guisto (Italian Navy) to further enhance the cooperation and coordination in the fight against piracy.

The flagships, ITS San Giusto (EU NAVFOR), HNLMS Rotterdam (NATO) and the ROKS Wang Geon (CTF-151) rendezvoused in the Gulf of Aden to allow the three Force Commanders to meet face to face.

The three Counter-Piracy forces coordinate their actions on a daily basis to enhance their capability and effectiveness in deterring, disrupting and counteracting piracy off the Somali coast and in the Gulf of Aden.  Although modern means of communications allow reliable long distance exchanges of information and a continuous flow of communications, face to face meetings are still very important.

This was the second time that the three main Counter-Piracy forces have met at sea; the first time having occurred on 23 July 2012 onboard HNMLS Evertsen (former flagship of Ocean Shield-NATO Commander).

The three Force Commanders discussed the strategic and tactical situation of piracy since the beginning of 2012 and agreed that, whilst the recent downturn in piracy off the Horn is Africa is welcomed, that military forces need to remain vigilant to further attacks by pirates on ships transiting the area.  (photo: EU NAVFOR)