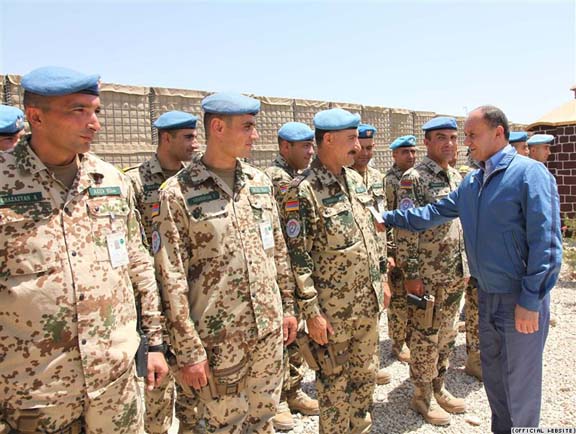 From Mark P. Hertling, Foreign Policy:  European Command’s strategy of Theater Security Cooperation — and USAREUR’s contribution as part of that strategy in training and exercising with the militaries and engaging with military and political leaders — is bearing significant results. The four nations that make up "the GAAT" are integrating forces in NATO out of theater and peacekeeping operations in places like Afghanistan and Kosovo, and the potential for peaceful management of the region’s substantial security challenges is improving.

Georgia has participated in ISAF since 2005 and has provided a caveat-free battalion under U.S. command since 2010. This contribution is set to double in October of this year. The Georgian military leadership is now requesting USAREUR’s support to train a brigade-sized command and control element for their increasingly capable and dramatically more professional force. Armenia has recently volunteered to send forces to the continuing Kosovo peacekeeping operation under U.S. command, after their partnership deployment with Greece ended due to the fiscal crisis in that country. Even while engaged in the poorly-named "frozen conflict" of Nagorno-Karabakh (N-K), both Armenia and Azerbaijan deploy company-sized elements to Afghanistan, under German and Turkish commands, respectively. Indeed, the fact that Azerbaijan and Armenia have both created brigade-sized peacekeeping and NATO-compatible units is an extremely positive development. Remarkably, both nations have developed these forces as a distinct military branch for the express purpose of participating in multinational operations. These units, which are specifically non-aligned with operations in N-K conflict, are largely manned by professional soldiers, not conscripts, and are led by English-speaking, western-trained officers. At a glance during my visit, they also appear better trained than line forces occupying positions along the NK line-of-contact.

The infusion of values and the concept of a "profession of arms" are taking hold in the younger elements of the Georgian, Armenian, and Azerbaijani officer corps, who are often trained in the west through the Individual Military Education and Training (IMET) program. The differences between these younger leaders — many of whom have already taken command in key positions — and the older Soviet-trained generals are palpable. In Georgia, for example, the Chief of the Army is exceedingly young, but in two years of engagement I have watched him grow into a mature and dedicated leader of his relatively small Army. The younger Battalion and Brigade Commanders in Armenia and Azerbaijan — many of whom received education at the Army’s War College at Carlisle or at Leavenworth — also exhibit a professional character found in more advanced security forces. Several of these Armies are also focusing on growing a professional NCO corps; this is one of the more significant signs of emerging and quantifiable progress. The younger, visionary political leaders know these aspects of a professional force are critical for further democratization and inclusion in European and NATO organizations. . . .

The forward presence of U.S. forces in various parts of the world is critical to an expansion of security cooperation and partner capacity building. Our forward presence in Europe eliminates the tyranny of distance, and it significantly enables realistic training and exercises with security forces of all different nations. But more than that, our presence builds trust; something that rotational forces cannot do to the same degree as those who share the continent. All these factors are necessary elements in reassuring political and military officials that there is a peaceful solution to regional tensions, and that other security challenges are best met working closely — and daily — with regional allies. Forward presence reinforces the reality that the United States is a committed partner in maintaining regional security.

Lieutenant General Mark Hertling is the current Commanding General, U.S. Army Europe and Seventh Army, where he is responsible for training U.S. Army Soldiers and units for Contingency and Full Spectrum Operations, enhancing Theater Security Cooperation, and Building Partner Capacity with 51 allied nations that are part of the European area of operation. (photo: Asbarez.com)