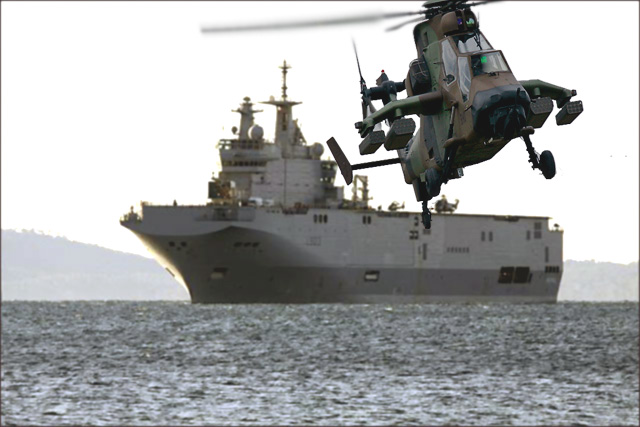 From the Congressional Research Service:  Analysts and officials from NATO member states concerned about the implications of allied military sales to Russia point to contracts signed in 2010 and 2011 between Russia and French, German, and Italian companies. These include what is considered the first sale of a significant offensive military capability to Russia by a NATO ally (the “Mistral” amphibious assault ship) as well as the first sale of a western military training center. Russia’s acquisitions reflect an apparent desire to acquire modern military technology and to secure licensing rights for future domestic production of this technology. . . .

France: Mistral-class Amphibious Assault Vessels
On January 25, 2011, after at least two years of negotiation, France and Russia signed an intergovernmental agreement to pave the way for France to sell four Mistral-class amphibious assault vessels to Russia. A contract for the sale of the first two ships was signed on June 17, 2011 by France’s state-owned naval defense company DCNS (Direction des Constructions Navals Systèmes et Services) and Russia’s arms import/export agency Rosoboronexport. Russia will reportedly pay €1.12 billion (about $1.47 billion) for the first two vessels, which will be constructed at the STX shipyard at Saint-Nazaire in western France. Construction began at Saint-Nazaire in February 2012. Reportedly, about 20% of the construction of the first warship and 40% of the second will be carried out by Russian firms. DCNS says it will deliver the first ship to Russia in 2014 and the second in 2015.  The second two ships are to be built in Russia, but a final contract has yet to be agreed. New shipyard facilities reportedly will be built in Kronstadt, Russia to construct the two Mistrals, after which the facilities will be used to build other warships. . . .

Reported Negotiations on Additional French Sales
According to press reports and commentary by Russia analysts, Moscow has been in talks with French firms for the possible purchase of infantry combat and communications equipment and light armored vehicles.

A February 2011 report in RIA Novosti cited Russian First Deputy Minister of Defense Vladimir Popovkin as saying that talks were underway for Russia to purchase so-called “soldier of the future” or FELIN (Fantassin à Equipements et Liaisons Intégrés, or integrated equipment and communications gear for the infantryman) gear kits from French firm Sagem, part of the Safran group. . . .

In February 2011, the CEO of French military manufacturer Panhard was quoted in the French press as saying his company was in “advanced talks” with Russia over the possible sale of 500-1,000 light armored vehicles (LAVs) for use by Russian border guards. A potential deal could be valued at anywhere between €200 – €500 million ($261 million – $654 million). . . .

Germany: Army Training Center
On November 24, 2011, German defense giant Rheinmetall announced that it had signed a contract with the Russian Ministry of Defense to build “a major army training centre” in Mulino, in Russia’s Volga region.Rheinmetall’s Russian partner in the deal is the state-owned Oboronservis (“Defense Service”) firm. According to Rheinmetall, the simulation-supported center will be able to train 30,000 troops a year by 2014. The center, considered by Rheinmetall to be “the most advanced system  of its kind worldwide,” will be modeled on an existing high-tech army training center used by the German Bundeswehr. . . .

Italy: Lynx Light Multirole Armored Vehicles (LMVs)
In December 2010, Russian media reported that the Italian and Russian defense ministries had reached agreement on the sale of 10 light multirole armored vehicles (Lynx LMVs) manufactured by the Italian company Iveco, a subsidiary of Fiat. At the time, Russian Defense Minister Anatoly Seryukov was quoted as saying that the initial purchase would lead to the establishment of a joint venture for the production of the vehicles in Russia and that Italy had agreed to pass over technologies for the production of the vehicles. In December 2011, the two sides reportedly signed a contract for Russia to purchase 60 Lynx LMVs from Iveco, including an agreement for partial assembly at a subsidiary of Oboronservis in the central Russian city of Voronezh. The first batch of 57 vehicles will reportedly be delivered by the end of 2012. . . .

Allied Reactions to the Sales and Implications for Alliance Cohesion
Some NATO member states have criticized the recent military sales to Russia and have expressed particular concern about not being consulted before the sales were approved. Public criticism—at times sharp—has been mainly limited to France’s sale of the Mistral, but some allies have also voiced concern at NATO about the German and Italian sales. The sales have exposed tensions within the alliance on NATO-Russia relations and NATO’s defense posture vis-à-vis Russia. This includes different perceptions of the operational risks posed to the alliance by Russia’s acquisitions and the effect of the sales on NATORussia relations. The willingness of some NATO members to export military equipment and technology to Russia has also raised questions about how responsive some member states are to the security concerns of other allies. Disagreements such as these are by no means a new occurrence at NATO, but additional military sales to Russia could heighten tensions further. . . .

To varying degrees, Estonian, Latvian, Lithuanian, and Polish officials publicly criticized the Mistral sale and what they considered a lack of communication from France before approving the sale. Lithuania was the most vocal critic, with Lithuanian Defense Minister Rasa Jukneviciene calling the decision by a NATO country to sell, “extremely complex offensive weaponry to a country where the level of democracy is not one that we can feel safe about,” a “big mistake.”  Estonian and Latvian government officials also criticized the sale but sought to downplay the regional security implications, focusing instead on the lack of French consultation before approving the sale.  One Polish official was quoted as saying the Mistral sale set a bad precedent and that the government hoped Russia would not acquire additional modern armaments.  In interviews in Brussels and Washington, diplomats from all four countries confirmed these views. They add that they have received assurances from the French government that no significant military technology would be transferred to Russia. . . .

Russian Military Training Exercises Involving Simulated NATO Engagement
Some observers have voiced concern that Russia’s recent defense acquisitions from NATO member states could be used in military exercises that simulate attacks on NATO allies. Below is a description of various Russian exercises, previous and planned, that could be illustrative of possible areas of concern:

• In October 2011, the Russian and Belarusian defense ministers agreed to host a 2013 “Zapad” (“West”) military exercise in Belarus, “to help prevent foreign aggression.” Details on the
exercise have not been announced, though the two countries held an exercise by the same name in August-September 2009 (see below).

• In September 2012, Russia will conduct the “Kavkaz” (“Caucasus”) military exercise in southern Russia. Despite initial reports, Russia recently has denied that the exercise will
include its military forces in Armenia and in the occupied regions of Georgia (Abkhazia and South Ossetia). Georgia has raised concerns that the exercise may simulate operations
against it. There is a slight chance that a few armored vehicles being supplied by the Italian Iveco firm might be available for the exercise.

• In September 2011, the Russian-Belarusian “Union Shield” exercise reportedly simulated repulsing a NATO attack. The exercise was held in central and southern Russia and involved
about 7,000 Russian troops, about 5,000 Belarusian troops, and a few invited Ukrainian troops (below the total number of 13,000 troops subject to observation under the OSCE’s
Vienna Documents on Confidence and Security Building Measures). Belarusian Chief of the General Staff Petr Tsikhanovskiy announced that the focus of the joint exercise would be countering operations like those carried out by NATO in Libya and Afghanistan. . . .

* In August-September 2009, 6,000 Russian and 6,000 Belarusian troops conducted the “Zapad” (“West”) military exercise in Belarus along its borders with Lithuania and Poland
and in Russia’s Kaliningrad exclave, and 7,000 Russian troops conducted an associated “Ladoga” (a lake near St. Petersburg)  military exercise in areas bordering Baltic and
Scandinavian countries. The Zapad exercise ostensibly involved operations against terrorists who had infiltrated into Belarus and the eastern part of the Kaliningrad Oblast from the
territory of Lithuania, but actually simulated repulsing a NATO attack on Belarus, according to many observers. The Ladoga exercise ostensibly involved repelling a terrorist attack
launched from Lithuania, but the main focus appeared to be on operations on the territories of the Baltic States and Finland. The Ladoga exercise included an amphibious landing in Kaliningrad. According to some allegations, a nuclear strike on Poland also was simulated. . . .

Possible U.S. Policy Options
In light of the aforementioned factors, U.S. policymakers might consider a number of policy options to shape U.S. and NATO policy on allied military sales and to address the effects of these sales on alliance cohesion. These include:

• Rigorous enforcement and congressional oversight of U.S. arms export control law and regulations. As noted above, a significant amount of allied military equipment contains U.S.-developed or U.S.-made components that would be subject to ITAR or other U.S. statutory third party export restrictions. . . .

* NATO assessments of trends in the global military balance and the effect on alliance security. . Some allies have called on NATO to take a more proactive role in assessing the
security implications of the “rebalancing” of the global defense market, including declining European and American defense budgets. . . .

• More visible assurance of NATO’s commitment to collective defense, including along its eastern borders. Such measures could include: continued support of NATO’s Baltic air policing mission; live military exercises in NATO member states, such as the planned Steadfast Jazz exercise scheduled to take place in Poland and the Baltic states in 2013; the
continued updating of defense plans; and continued implementation of NATO’s territorial missile defense program. . . .