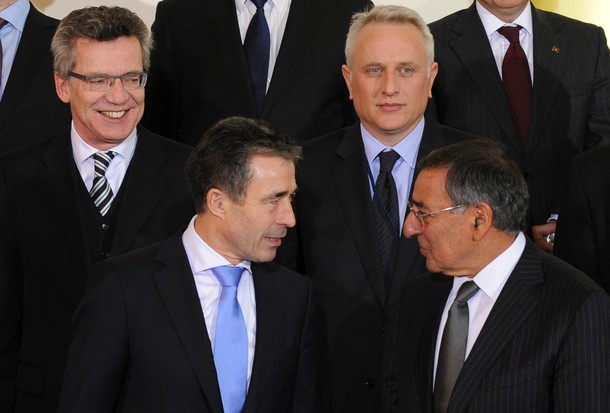 The Afghan security force is due to grow to a peak of 352,000 by October, part of a hugely expensive drive to beef up their strength to deal with Taliban insurgents and allow the bulk of Western combat forces to withdraw by the end of 2014.

The effort is largely funded by the United States, at a cost of $11.6 billion for this year alone, at a time when the U.S. Department of Defense is suffering huge cuts to its budget.

While recognizing it will be many years before Afghanistan is able to pay for its own security, NATO states are keen to avoid recurring costs of such magnitude after 2014, so have been considering options for a much smaller future force, with the aim of reaching agreement at a summit in Chicago in May.

NATO diplomats said U.S. Defense Secretary Leon Panetta had suggested a long-term target size for the police and army of 227,000, while French Defense Minister Gerald Longuet told reporters France would be happy with a figure around 230,000.

A senior U.S. defense official said the plan remained to build the force up to about 350,000, the size seen as necessary to give the Afghan military the internal support capabilities it will need to carry out operations on its own. . . .

He said experts from the International Security Assistance Force would travel to NATO soon to brief the allies on the size and cost options of different force levels.

The official said the final numbers would be based on "both efficiency – you can’t go too low before you begin to take too high a risk – and the sustainability, the price tag of different options. . . ."

NATO said it was still some way from a decision.

"We discussed what could be a long-term sustainable size, but no decision has been made," NATO Secretary-General Anders Fogh Rasmussen told a news briefing. "We agreed we will engage in a consultation process leading up the summit in Chicago. . . ."

Officials say even the smaller Afghan security force could cost $4-5 billion a year to maintain, including about $1.1 billion from non-U.S. contributors.

The United States alone, which provides the bulk of the 130,000 international troops in Afghanistan, currently spends $130 billion in Afghanistan annually.  (photo: Getty)