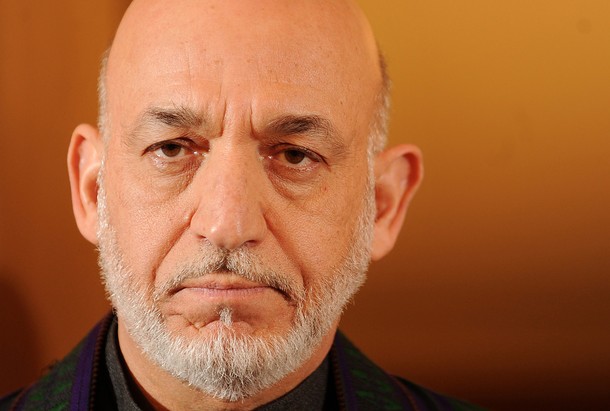 From Alissa J. Rubin and James Risen, the New York Times:  A cousin of Afghanistan’s president was killed Wednesday during a night raid by NATO and Afghan forces in which they detained the man’s son as a suspected Taliban commander, as well as at least two of the family’s bodyguards.

The case brought the delicate issue of civilian casualties into the presidential palace and added to the already tense relationship between the Afghans and the Americans. It also raised questions about whether a member of the extended family of President Hamid Karzai might have Taliban ties, or whether bad intelligence led to a deadly raid on the home of an innocent family.

Either way, the raid raises the prospect of another intense flare-up between NATO and Afghan officials, coming after two other cases of civilian casualties in the past three weeks. Night raids on family compounds, in particular, have long been controversial for their intrusiveness and the civilian casualties associated with them. Startled Afghan men, who commonly keep weapons at home, often react by reaching for their guns and are then shot, often by Special Operations forces.

This raid occurred in the southern province of Kandahar, in the rural village of Karz, the Karzai clan’s ancestral home. The man who was killed was Yar Mohammad Karzai, a lifelong resident of the village who was in his early 60s.

On Thursday evening, a NATO spokesman said the force was “aware of conflicting reports about the identities of those involved and has initiated an inquiry to determine the facts.” In Washington, spokesmen for the Pentagon and the White House also said they had received conflicting reports about the episode and declined to comment until they received more information.

The death was confirmed by the president’s half brother, Ahmed Wali Karzai, the chairman of the provincial council in Kandahar. He said the raid was a joint operation by the NATO force — the International Security Assistance Force — and the Afghan National Army that had gone awry. “The prime target was not actually him,” he said. “It was somebody else. But mistakenly he was killed, and ISAF apologized for that.”  (photo: Getty)