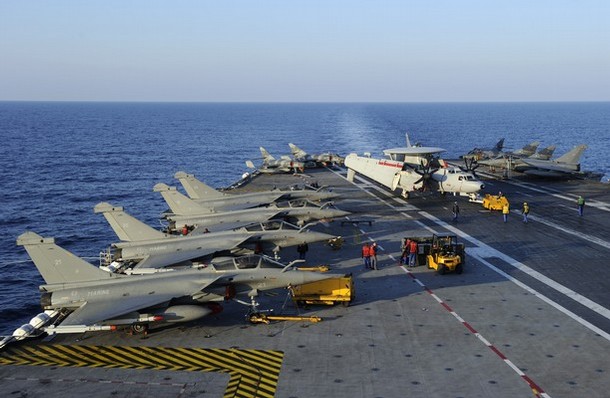 From Sarwar Kashmeri, European Geostrategy:  Even before the onset of hostilities in Libya it was obvious to insiders on both sides of the Atlantic that NATO was increasingly dysfunctional. Libya has now shown the wider public that the emperor has no clothes.

Cohesion used to be NATO’s trademark, but there is little of that left. And the reputation of the ‘greatest military alliance’ is a diminishing commodity for younger American military officers as I recently found out during a visit to a United Sates Navy aircraft carrier. During dinner I was seated between the ship’s two senior officers. The older Executive Officer felt NATO was the cornerstone of Western defence, while the younger commander of the ship’s attack squadrons told me it still had to be proven to him that NATO was still useful.

Left dangling in this state NATO will soon become irrelevant to the security needs of the Euro-Atlantic area. Worse, its internal tensions will continue to damage the already brittle transatlantic ties.

America has underwritten the security of Europe for over sixty years. It is not a state of affairs that I believe the increasingly pressured American taxpayer will look upon favourably any more. Especially considering that the European Union’s gross domestic product now exceeds America’s and the combined defence budget of the Member States of the European Union of around €200 billion (over $300 billion) is not appreciably smaller than America’s defence budget – after removing the expenses of the Iraq and Afghanistan wars and subtracting the expenses of America’s world-wide responsibilities, a global role that Europeans seem to have no desire to underwrite or assume.

Rebalancing security responsibilities will also be a sign of how deep and wide the transatlantic relationship really is, and how far it has come from the days when Europe was completely reliant on the United States for its very survival. Yet, a refashioned NATO with a unified European pillar existing alongside the North American pillar will ensure that there is a mechanism to enable the European Union, the United States, and Canada to act together, if that should ever become necessary again.

It would be a pity to let NATO fade away; because it will then have to be reinvented someday. And that will not be easy.

Sarwar Kashmeri is a senior fellow in the International Security program of the Atlantic Council and a fellow of the Foreign Policy Association. His new book – NATO 2.0: Reboot or Delete – was published by Potomac Books, April 2011. A European launch of the book is being organised in Brussels by the Bertelsmann Stiftung for 15th June 2011.  (photo: Getty)