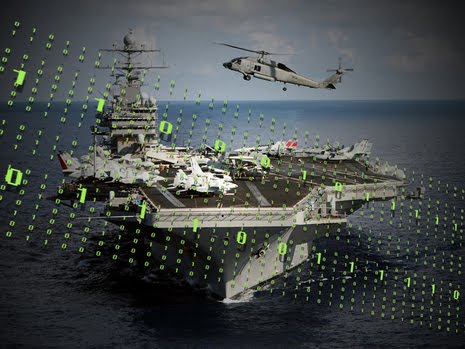 From Kendall L. Card and Michael S. Rogers, Proceedings:  The opening shots of the next war will likely occur in cyberspace.

The Navy is inextricably dependent on cyberspace and its information and networks, along with the terrestrial and space transport paths for its operations. In effect, the network and its components (information, intelligence, technology, people) have become a combat system. In this form, the network can serve as a platform from which to launch information as a weapon. As an enabler (information in warfare), it has evolved as a nonkinetic weapon (information as warfare). . . .

[T]he military force that best uses its networks and cyberspace to exploit and attack the vulnerabilites of its adversaries will have a combat advantage. Moreover, the integration of nonkinetic or electromagnetic strike options with traditional kinetic fires will significantly enhance the overall warfighting effect. This is why the network must be operated and "fought" as a warfare platform, in the same way as are aircraft, ships, and submarines. . . .

The network and the electromagnetic spectrum are fundamentally the battlespace within this realm. They are likely to figure largely in future conflicts and crises, and the military force that most effectively engages in cyberspace will create an advantage. . . .

The Navy leverages cyberspace to provide commanders with operational and tactical advantages. Practically all major systems on ships, aircraft submarines, and unmanned vehicles, are networked to some degree. This includes most combat, communications, enginereering, and position, navigation, and timing systems. Additionally, cyberspace extends equally across joint and Navy business and industrial control systems.

Allowing for speed, agility, and precision in a broad range of missions, cyberspace delivers the reliable, secure communications that are essential to effective C2. Network-centric weapons systems like the Tactical Tomahawk use cyberspace to received in-flight targeting data from operational command centers. Similiarly, carrier aviation maintenance programs rely on it to deliver mission-ready aircraft. Even the most routine activities, such as training, educational, medical, and logistical functions are conducted via cyberspace. Despite its speed and convenience, however, it is laden with vulnerabilities and threats that can affect Navy networks and reduce combat readiness.

Because of the service’s increased reliance on these types of operations, cyberspace superiority and our maritime dominance are essentially interdependent. Success in the maritime domain and joint operational environment depends in no small part in our ability to maintain freedom of maneuver-and-deliver effects in cyberspace. Therefore, protecting access to it is just as paramount as is protecting sea lines of communications. This is why, in addition to the previously listed fundamental facets of information dominance, the Navy:

* Operates, defends, exploits, and engages in cyberspace to ensure access for all mission-critical functions and to provide Navy and joint commanders with resilient C2 capabilities. This is assured access to cyberspace and confident C2.

* Evaluates adversary actions in cyberspace through dedicated cyber-intelligence collection and analysis, and by fully integrating timely and relevant cyber information and threat warnings into the commander’s operational picture. These measures are intended to prevent strategic surprise in cyberspace.

*Delivers decisive cyber effects at a time and place of the operational commander’s choosing, across the full range of military operations in support of the commander’s objectives. . . .

[F]uture warfighting capabilities will focus on better controlling the electromagnetic spectrum, extending our defensive and offensive capabilities in the cyberspace domain and maintaining the speed, agility, and adaptability of our decision-making and C2 abilities during operations in a communication-degraded or denied environment. . . .

In spite of the challenges we face in achieving assured C2, battlespace awareness, and integrated fires, the future has arrived, and there is not turning back. Information in all its forms will continue to evolve. We must evolve with it. Whether characterized as cyber, intelligence, surveillance, reconnaissance, networks communications, space, meteorology, oceonagraphy, or electronic warfare, this new center of gravity in maritime warfare means that information dominance has become a Navy warfighting imperative.