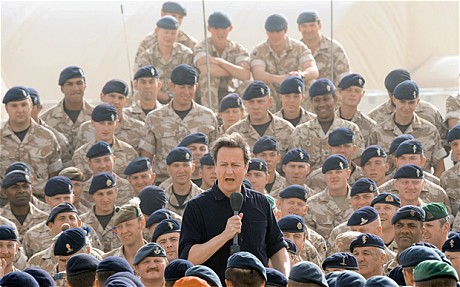 From James Kirkup, the Telegraph:  Following the killing of Osama bin Laden in Pakistan, the Prime Minister is increasingly determined to start bringing the Afghan mission to an end. He has told defence chiefs he wants to start the withdrawal this summer, as the US begins to reduce its troop numbers.

But British commanders have warned David Cameron that an early exit could jeopardise the counter-insurgency mission, allowing the Taliban to regain territory and popular support.

As a compromise, defence chiefs have reluctantly drawn up plans to withdraw 450 of Britain’s 10,000 troops from Afghanistan. Mr Cameron wants to agree their withdrawal with Barack Obama when he visits London later this month.

The British troops could leave Afghanistan as soon as July, when the American withdrawal begins. . . .

One senior Whitehall official said: "There is a very active conversation going on. On the one side there is the military concern about force density and continuing the mission, and on the other side is the PM’s political imperative for some sort of announcement on draw-down."

Mr Cameron has already said that Britain’s combat mission in Afghanistan must end by 2014, in time for the next general election.

A government source said that the killing of bin Laden had increased Mr Cameron’s "sense of urgency" about ending the Afghan mission.

"The bottom line is he wants out, and soon. And at the end of the day, he’s the Prime Minister, so he’ll get what he wants," said the source. "The worry is he’s being driven by politics not strategy."  (photo: PA)  (via Morning Defense)