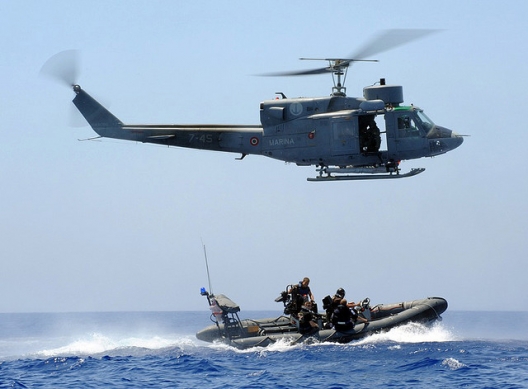 Following the decapitation of 21 Egyptian Coptic Christians by radical Islamists professing an allegiance to the Islamic State, the Italian government has begun ramping up efforts to defend its territory from attack. How realistic is this threat? And what should Italy do?

First, we should listen to what the Islamic State has to say : Last year, the group’s propaganda magazine Dabiq featured a cover story headlined “Reflections on the Final Crusade,” which was illustrated with an image of a black jihadist flag flying over St. Peter’s Square. “We will conquer your Rome, break your crosses, and enslave your women,” a senior leader of the group was quoted as saying….

The Islamic State does not have the capability to launch a conventional attack on Italy, but it has two potential routes into the country by sea. It could infiltrate the boatloads of illegal migrants who sail the short distance from Libya to Italy’s southern coast and islands. Or it could use small craft, much as smugglers and drug runners do on the Adriatic, to cross the southern Mediterranean. Both methods would be easier than entering over land through Turkey and the ­Balkans.

If the Islamic State wants to inflame a religious war, what better place to attack than Rome? A significant strike at a Christian holy site would fit both its self-stated strategy and its building narrative. Our Italian allies are well aware of this and are responding with the correct initial steps, including placing portions of both their military and the capable Carabinieri paramilitary forces on higher alert, adding more nautical patrols between Libya and their southern islands; sharing intelligence throughout NATO and European Union/Interpol channels; and publicizing these measures to appear a more hardened target.

What else can done?

First, NATO must get into the game. Italy should convene a discussion under Article IV of the NATO treaty, which permits any member to bring security matters before the North Atlantic Council in Brussels. Such discussions are typically used for issues considered particularly concerning, and they occasionally lead to common action under Article V (the famous “an attack on one shall be regarded as an attack on all” clause). When Turkey felt threatened by Syrian air activity several years ago, NATO responded by sending Patriot batteries to defend Turkish airspace. Those batteries remain today. In the case of Italian concerns about Islamic State infiltration, Standing NATO Maritime Groups could likewise be used to support the overloaded Italian Coast Guard and Navy….

Europe needs a strategy to help move Libya toward stability. This means exploring a U.N. or European Union peacekeeping mission; supporting the relatively moderate, internationally recognized government centered in Tobruk; and cooperating closely with Egyptian efforts to take on the Islamic State militarily with targeting, intelligence, financial support and, potentially, airstrikes. In the United States, we can support Italy by helping to lead a Western effort to stabilize Libya.

James Stavridis led the 2011 intervention in Libya as the 16th supreme allied commander at NATO. Now a retired U.S. Navy admiral, he is the dean of the Fletcher School of Law and Diplomacy at Tufts University.