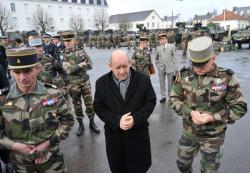 From Steven Erlanger, New York Times:   “I had always been the boss of regional councils, but not in a situation to decide a war,” he [French Defense Minister  Jean-Yves Le Drian] said. “I had never in my life been confronted with such a situation.” As a Breton, he said, “I come from very modest and local beginnings, from a region that has been excluded for a long time, and I have the tendency to be discreet and reserved, not to show too much.” He considers himself Mr. Hollande’s “good soldier.”

In the weeks since Jan. 11, when France went to war in Mali, Mr. Le Drian said, he has learned a lot about himself and those around him. He has had to go before the public, the Legislature and the news media to explain, justify and describe the war. He has also discovered in these weeks, he said, “that I have become stronger.” Being responsible for the lives of others at war “is not a burden, but a permanent tension,” he said. “I don’t see it as a burden, but as a duty. That’s a help.”

The intervention in Libya did not finish properly, he said. “We can’t allow ourselves this in Mali.”

Two French soldiers have died so far — the first shot from the ground on the first day, and the second on Tuesday in a clash with Islamists in Mali’s northern mountains. But there have been long nights of anxiety, too. When the French sent 200 parachutists into Timbuktu, it was about 4:30 a.m. in Paris. Aides woke up Mr. Le Drian to tell him the news; he waited until 6 to call Mr. Hollande.

There are already concerns about “mission creep” — France wants to hand off as soon as possible to the West African regional group Ecowas and allies like Chad, whose troops, being more light-skinned like the Arabs and Tuaregs of Mali’s north, are more acceptable to residents there than the darker-skinned Malian Army. France wants a new United Nations Security Council resolution to rebadge the African force as blue-helmeted peacekeepers and has been pushing for new elections in Mali, now scheduled for July 7.

But the French are also waiting for European Union military trainers to help restore the broken Malian Army, a mission approved by Brussels only on Monday, and the collapsed state itself must be rebuilt. Part of that process must be a negotiated reconciliation between Bamako and Tuareg nationalists who had sided with the Islamists and must agree to give up their demand for independence in return for an undefined autonomy or federal state.

All this will take many months and require stability, Mr. Le Drian concedes, and while the French express hope that African forces will pursue the Islamists into the mountains and deserts of the vast north, it is highly likely that French special forces will have to continue to operate on their own and alongside the Africans, with the help of American surveillance drones.

One of the most shocking lessons for him from Mali, Mr. Le Drian said, was the lack of French surveillance drones, which he called “incomprehensible.” France has only two drones in theater, he said. “A country with aeronautical skills, that makes good airplanes and that did not anticipate what surveillance and intelligence will look like tomorrow — or even combat!” he said. France “did not anticipate and refused to make this choice — but this doesn’t date from today but from 5 or 10 years ago. I have asked that someone explain the story to me so I understand why we didn’t do it, since, really, we should have.”

Perhaps the problem was national pride and a refusal to buy American? “I’m trying to remedy this impasse and this pride,” he said. “It’s a real question for us.”

Similarly, he said, France lacks adequate air refueling capacity, for which again he thanks Washington, which after some hesitation agreed to provide refueling planes. As for air transport, France would always rely on its allies in NATO, he said. “That issue we finally fixed without too much trouble because we were supported by the British, the Americans, but also the Spanish, the Germans and the Canadians.”

But France must consider, he said, whether it can continue to rely on such burden-sharing, or strive for self-sufficiency — highly unlikely given austerity measures.

So the question arises, he agreed, for Europeans, too — will there be a real European Common Security and Defense Policy capable of acting separately from NATO, as France has always favored? After all, there is supposed to be a Eurocorps of rapid-reaction troops ready to fly at a moment’s notice, but no one ever calls on them.

In the end, Mr. Le Drian said, the future may simply look like Mali and Libya — a coalition of willing nations, using at least some NATO assets.  (photo: AFP/Getty)