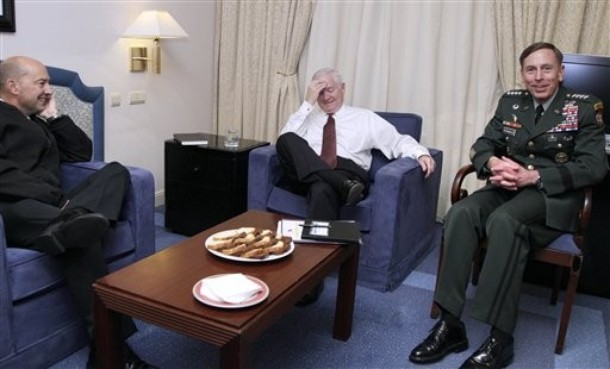 From Laura Rozen, the Envoy:  David Petraeus, perhaps the most celebrated American general of his generation, is likely to leave his job as the top U.S. commander in Afghanistan this summer, multiple defense officials say.

Meantime, the deputy U.S. commander in Afghanistan, Lt. Gen. David Rodriguez was nominated this week for a fourth star and to take charge of Army Force Command, moving to Ft. Bragg, North Carolina. He is likely to be succeeded in Afghanistan by Lt. Gen. Curtis "Mike" Scaparrotti, currently commander of the I Corps and Joint Base Lewis-McChord, in Washington State, defense sources said. …

Where will Petraeus go? Military analysts who have worked with the commander say he has long been interested in commanding U.S. forces in Europe–the Supreme Allied Commander for Europe, SACEUR–a post currently held by Adm. John Stavridis. Some twenty-five years ago, Petraeus served as a speechwriter to then-SACEUR Gen. John Galvin, a defense analyst said, and Petraeus has been intrigued by the job since.

Another military analyst who has recently interacted with Petraeus in Afghanistan said Petraeus is worn out, and still recovering from prostate cancer. …

Meantime, SACEUR Stavridis is said to be a contender, along with the Vice Chairman of the Joint Chiefs of Staff Gen. James Cartwright, to succeed Adm. Mike Mullen as chairman of the Joint Chiefs of Staff when Mullen retires at the end of the year. Cartwright–who represents the uniformed military at the all-important White House deputies committee meetings — is said to be an Obama favorite. He was recently exonerated from allegations of an improper relationship with a female aide. Stavridis, currently commanding NATO operations in Libya, is also very highly regarded as a rising star and terrific manager.  (photo: AP)