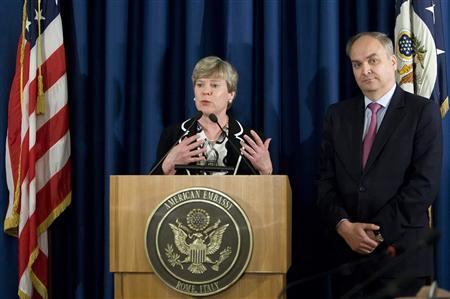 From Douglas Birch, the AP:  Talks between the U.S. and Russia over a new anti-ballistic missile system for Europe are stuck on a key point, with Moscow demanding to jointly run the system and the U.S. refusing to yield.

Russia is insisting on shared control of the missile defense program with the U.S. and NATO, which President Barack Obama has flatly opposed because it would essentially give Russia responsibility for protecting NATO from nuclear missile threats. The U.S. is offering Moscow a more limited role. …

Russia’s U.S. Ambassador, Sergey Kislyak, told an industry-sponsored conference here this week that the two sides still haven’t come up with a good understanding of how a joint program would work, warning that his country wasn’t interested in "cloning" decisions already made by the U.S.

Referring to Russian fears that the missile defense system could target Russian warheads, Kislyak said Moscow is determined to maintain a strategic nuclear balance with the West.

"We want to be reassured that whatever you do there doesn’t undermine the stability of deterrence, because deterrence is still with us," Kislyak said Wednesday at the Nuclear Weapons Monitor Nuclear Deterrence Summit in Washington. "We haven’t reached a state … between our two countries that would allow us to abolish it. We would like to see it happen. But that’s going to be a long way (off)."

The U.S. and NATO have proposed sharing radar and other early warning data, but Assistant U.S. Secretary of State Rose Gottemoeller, the top U.S. arms control negotiator, told the industry summit that Obama has decided that "NATO will protect NATO, and that’s the bottom line as far as we’re concerned. …"

"The Chinese are very, very concerned about missile defenses," said Sharon Squassoni of the Center for Strategic and International Studies, a Washington think tank. "A moderately effective missile defense, which we don’t have yet, could really neutralize their nuclear capability and they know that. .We have to do this with the Russians because we’re going to have to do this with the Chinese later on."  (photo: Reuters)