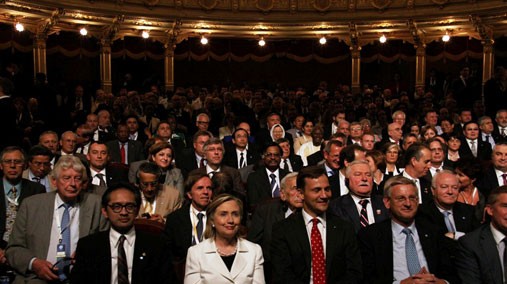 From Jeremy Kinsman, the International Herald Tribune:  At the Seattle-Tacoma International Airport recently, this global cause no longer seemed to impress a tough U.S. Homeland Security officer who challenged my explanation of what I was doing in the United States. “A ‘foreign democracy project’? Haven’t we stuck our noses enough in other peoples’ business and done enough harm?”

Indeed, the Pew Research Center reports a drastic fall in U.S. public support for democracy promotion. At the same time, democratic space in the world is narrowing in what Freedom House calls a “freedom recession” as the number of countries practicing democracy dips for the fourth year in a row. …

Meanwhile, dictators push back and kick down. George Kennan called “the rise to power of the most determined, decisive, and often brutal natures … the common condition of most of mankind for centuries.” Ordinary people in Myanmar, Iran, Cuba and Zimbabwe have ruined lives if they step out of line. …

In foreign policy, democratic states can handle interdependent interests and values at the same time, provided we are consistent. Our self-interest compels that we engage with key non-democracies. But political capital from those relationships can be deployed also to support the legitimate rights of civil society and embattled human rights defenders.

We can work with strongmen without coddling their corrupt relatives or their torturers on false grounds of security. Authoritarians have to know that we support heroes of conscience like Aung San Suu Kyi, Liu Xiaobo, Oswaldo Paya or Ayman Nour, and that the values we share with them are not negotiable.

Jeremy Kinsman, a former Canadian ambassador, has supervised the “Diplomat’s Handbook for Democracy Development Support” for the Community of Democracies.  (photo: US State Department)