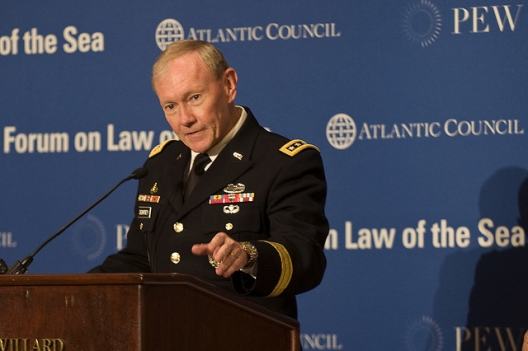 The U.S. military is prepared to back up NATO if the unrest in Ukraine escalates, Joint Chiefs Chairman Gen. Martin Dempsey said Friday.

American diplomats are working around the clock to come to a solution to Russia’s takeover of Crimea in eastern Ukraine. Dempsey said he’s been talking to his military counterparts in Russia, but he’s also sending a clear message to Ukraine and members of NATO that the U.S. military will respond militarily if necessary.

“We’re trying to tell [Russia] not to escalate this thing further into Eastern Ukraine, and allow the conditions to be set for some kind of resolution in the Crimea,” Dempsey said in an interview with PBS Newshour’s Judy Woodruff.

“But the message we are sending militarily is to our NATO allies,” he said.

When asked if there is a chance of U.S. military intervention in the Ukraine crisis, Dempsey replied, “That’s a question that I think deserves to be assessed and reassessed and refreshed as this thing evolves.”

Dempsey cautioned, “If Russia is allowed to do this, which is to say move into a sovereign country under the guise of protecting ethnic Russians in Ukraine, it exposes Eastern Europe to some significant risk, because there are ethnic enclaves all over Eastern Europe and the Balkans.”