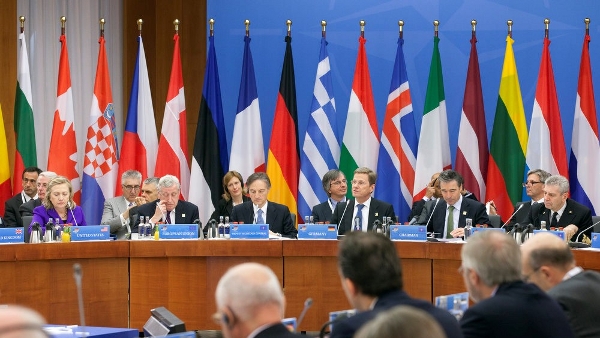 George Evans, King’s College London – United Kingdom: In light of the well documented ‘green-on-blue’ attacks, most recently involving NATO troops and seemingly growing in prevalence over the course of the last year, how does this level of subversion within the Afghan Local Police impact upon Afghanistan’s ability to provide security to its civilian population in the wake of the 2014 withdrawal?

Ambassador Alexander Vershbow: Insider threats cause great concern and we take them very seriously. The safety of our troops is paramount, and we have always said that we will take every step necessary to minimise the risks to our troops, and that is what we continue to do in Afghanistan. We are working closely with out Afghan partners to further reduce the potential for such incidents. And COMISAF, General Allen, is personally leading efforts to reduce the threat. This has included a temporary suspension of some partnered training activities below the battalion level until additional preventive measures have been put into effect.

But these attacks are not the whole story in Afghanistan. Despite the tragic incidents, the vast majority of our troops work well with their Afghan colleagues, as we can see everyday across the country, where there are literally thousands of interactions between coalition and Afghan forces. We conduct 90% of our operations with our Afghan partners.

The Afghan national security forces continue to grow in strength, capability and confidence. They are steadily taking the lead for the security of three quarters of the Afghan population. We expect them to take on the security lead for even more areas in near future. They are doing more and more of the fighting. And they are carrying out 85% of the training. We are confident that by the time we get to the end of 2014, we will be handing over a situation in which the Afghan national security forces are capable of maintaining security in their own country, as it is their responsibility and their right to do.

Jennifer Allan, PhD. Student, University of British Colombia – Canada: Despite the end of the Cold War and changing nature of conflict, NATO remains relevant. What, in your view, explains NATO’s resiliency?

Ambassador Alexander Vershbow: The idea that NATO has lost its relevance has been continually put forward for decades, but each time NATO has reinvented itself to address changes on the security environment, thereby proving its continued value and rebutting these claims. I believe it will continue to do so now and in the future. NATO is more than just a military alliance, it is a political alliance, where each day 28 nations and their partners cooperate, and sometimes argue, over key political issues. That type of day-to-day cooperation and interaction is invaluable.

Some think that with the end of our combat mission in Afghanistan at the end of 2014, NATO will have earned a period of rest and rebuilding, or that it in fact will no longer be relevant. But building a Europe whole, free and at peace remains a work in progress. And we can’t ignore what is happening elsewhere in the world either, in places such as North Africa and the Middle East. We simply can’t stop the world and get off. NATO must continue to adapt to help meet the security demands of the 21st century, and it will.

Ambassador Alexander Vershbow: NATO is more than just a military Alliance, it is also a community of shared beliefs and principles. All members share the same fundamental values of liberty, democracy, the rule of law, and respect for human rights. And all our members are prepared to defend these values whenever necessary.

NATO’s strongest partners are those that share our values. At the same time, we make clear our concerns to those partners that fall short of our expectations when it comes to democracy and the rule of law.

In a world in which threats know no borders, we also need to engage with partners across all continents who share an interest in making concrete contributions to global peace and security. We support the commitment of our partners to carry out democratic reforms and stand ready to assist them in those areas in which the Alliance has greater expertise, more notably in defence and security sector reform. We also work together with other international organisations, and with non-governmental organisations.

Many of our partners, including Azerbaijan, are committed to developing modern and accountable military forces that are relevant to today’s security challenges, and able to play their full part in multinational operations.

An example of our cooperation is the NATO and Azerbaijan Mine Agency project to remove landmine stockpiles from agricultural land. Half a million unexploded munitions have been destroyed. This is one of the biggest projects of this nature in the world, freeing up hundreds of hectares of land for agriculture and development and preventing loss of life.  (photo: Thomas Köhler, Photothek.net/AA)