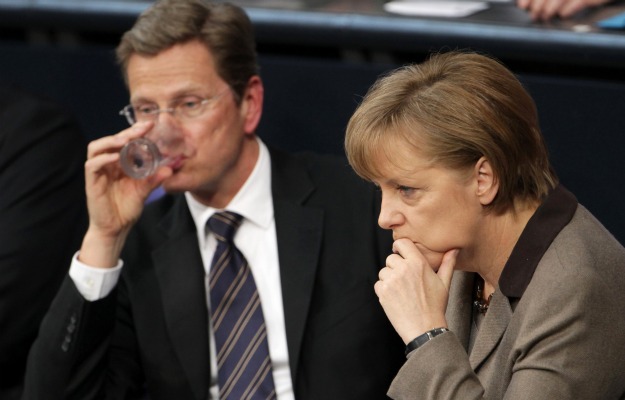 From David Rothkopf, Foreign Policy:  I will be happy to tell you how a host of the world’s current problems will work out if you answer one question for me: How far will Germany go to solve other countries’ problems?

From the European debt crisis to its knock-on consequences for Japan, the United States, and the World Economy, from stabilizing the Middle East to promoting lasting reform in that part of the world, from the future of environmental policy to the future of multilateralism, a very substantial factor in the outcome of each will be whether or not an overburdened, increasingly introspective Germany is willing to play the role of global leader. …

For some, the notion that so many issues important to the future of the world depends on the international engagement of a benevolent Germany will seem more than a little ironic. So too will the fact that Germany has become Europe’s indispensible nation. But these are among the game-changing facts of the 21st century. Germany is not just the wallet of Europe, it also must necessarily be Europe’s spine and its heart. Fortunately, Germany has always been dependably attentive to its self-interest. The collapse of the Euro or the inundation of Europe with refugees from increasing unrest in the Middle East would be disasters for Germany. And as my economist friend said, they would also be very disorderly and "Germans don’t like disorder." They must play the role of backstop, he implied, the safety net-for Europe and its neighbors when problems arise, Germany must be there to help catch and lift back up those who tumble, Deutschland, unter alles.  (photo: Michael Kappeler/AFP/Getty)