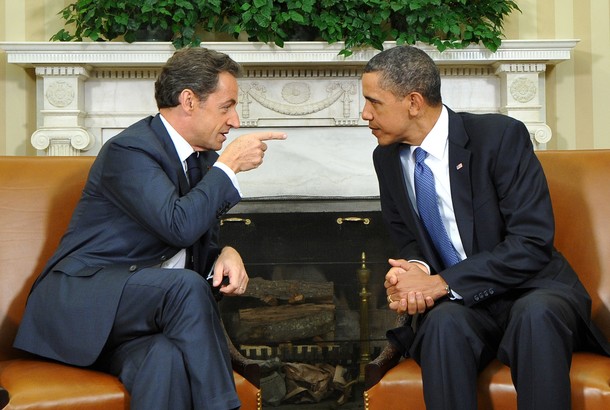 From Anne Applebaum, the Washington Post:  The French Socialist Party triumphed in local elections last weekend. The Libyan rebels triumphed in Brega and Ras Lanouf. In France, attention turned to the presidential election of 2012. In Libya, the rebels set their sights on Tripoli. You may not think all of these things are connected. But they are. …

In the interests of what remains of alliance solidarity, no NATO members vetoed the Libyan operation, which was thrust upon the organization by President Obama. But Germany and Turkey — two historical pillars of the alliance — vehemently and publicly objected. A host of others are quietly fuming. According to one insider’s account, [French President Nicolas] Sarkozy agreed to put the operation under a NATO flag only after the White House threatened to withdraw completely. He had apparently assumed that the U.S. military would continue to underwrite an intervention he led.

The European Union emerges looking even worse. Had Sarkozy’s primary aim been to expose the weakness and incoherence of European foreign policy, he could not have done so any more effectively. Europe’s “foreign minister,” Catherine Ashton, has been sidelined. Europe’s institutions have played no part. An editorial in (pro-European) Le Monde put it best: The Libyan affair “demonstrates the immaturity of European security and defense policy, the poverty of the political debate and the inadequacy of personnel.” No one thinks Europe is going to emerge from this affair any stronger, even if the French president does.  (photo: Getty)

Sarkozy also hopes the Libyan adventure will make him popular, too. Nobody finds this suprising. At a conference in Brussels over the weekend, I watched a French participant boast of France’s leading role in the Libyan air campaign; a minute later, he heartily agreed that the war was a ploy to help Sarkozy get reelected. The two emotions — pride in French leadership and cynicism about Sarkozy’s real motives — were not, it seems, mutually exclusive.  (photo: Getty)