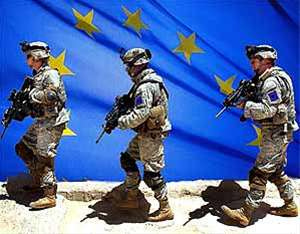 From the DPA:  The European Union has been toying with the idea of creating a common defence policy for at least a decade. Diplomats say that the Libyan crisis has put an end to that illusion.

Common Foreign and Security Policy (CFSP) "shall cover all areas of foreign policy and all questions relating to the Union’s security, including the progressive framing of a common defence policy that might lead to a common defence," the EU states in the Lisbon Treaty, its main rulebook.

But when it came to launching military action against Libyan leader Moamer Gaddafi – nobody turned towards the CFSP mechanism. …

NATO – while torn over whether it should take control of the no- fly zone operation – took five days to apply another plank of the UN- authorized action against Gaddafi – policing an arms embargo with naval patrols in the Mediterranean.

"We could have done that, but the truth is that if we tried we would have taken three months, not three days, to approve an operational plan," an EU diplomat told the German Press Agency dpa. …

A diplomat who took part in Monday’s talks told the German Press Agency dpa that a military role for the EU was hardly contemplated – as ministers’ discussions focused on the brewing row at NATO over its role in the war effort.

"The CFSP died in Libya – we just have to pick a sand dune under which we can bury it," the source quipped.

"For anyone who is a committed European, Monday was a very painful day," another EU diplomat said. (graphic: tangledblog)