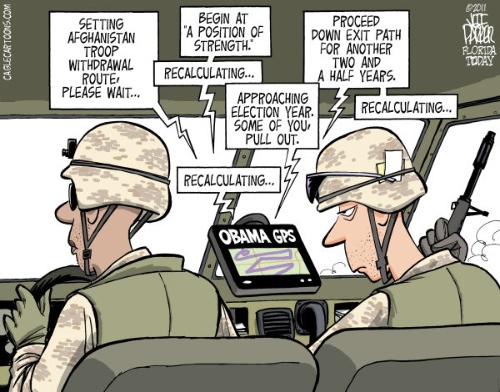 From Karen DeYoung, the Washington Post:  With war fatigue growing and an election looming, the Obama administration has bumpily embarked on its endgame in Afghanistan.

In recent weeks, closed-door strategizing over Taliban peace talks, the pace of NATO’s combat handover and withdrawal, and the future of U.S. relations with Afghanistan and Pakistan have suddenly become part of the public and political debate.

But revelations about plans already in motion have emerged sooner than the administration has been prepared to explain them, complicating efforts to turn them into a coherent whole and build support.

“There are people at every piece of this — the Taliban, Islamabad, Kabul and Washington” — who object to or are trying to influence elements of the emerging strategy, a senior administration official said, speaking on condition of anonymity to talk more candidly. “They use leaking as a tool.”

U.S. and Afghan military forces on the battlefield responded with open concern that they weren’t ready for an early turnover. At the White House, aides grumbled that only President Obama could announce a new timetable and that he wouldn’t be addressing the issue until a NATO summit in May.

Panetta’s comments also poured fuel on an ongoing debate within the administration’s national security team over the right balance between talking to the Taliban and fighting them, even as the troop-heavy counterinsurgency argument that won Obama’s approval two years ago has shifted in favor of those who advocated a sleeker counterterrorism force.

Some senior officials privately echoed Republican critics, who argue that an earlier end to the combat mission — or even public discussion of one — would weaken the administration’s hand as State Department and National Security Council officials prepare for another meeting with Taliban representatives this month in Qatar, and as the military girds for this summer’s fighting season. . . .

The administration says no military decisions will be made before the NATO summit. On the negotiating front, it interprets the myriad moving parts as progress. “A year ago,” the first senior official said, “nobody was talking about a peace process. You have to say that today, lots of people are talking about an Afghan peace process. No one knows how all this will turn out.”  (graphic: Jeff Parker/Florida Today)