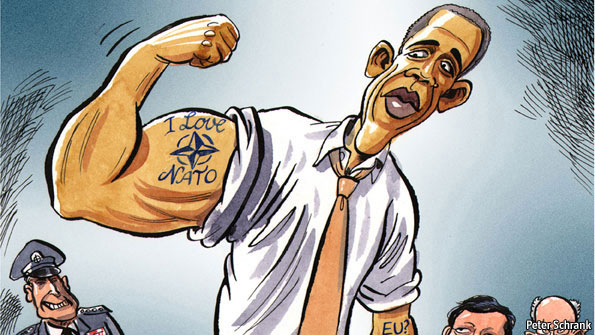 From Charlemagne, the Economist:  It is the biggest, closest and richest friendship in the world, and its most important military alliance. America and Europe account for half of global GDP and nearly one-third of trade. Each side of the North Atlantic has more than 1 trillion invested in the other. Yet the partnership is strangely unbalanced. Like a misshapen weightlifter who exercises only one arm, the partnership bulks up its military limb, perhaps even overworks it. Meanwhile the economic and political one is weedy and neglected.

Take this month’s NATO and European Union summits in Lisbon. The NATO gathering was a big affair, spread over two days, attended by leaders of the alliance and special guests, among them the presidents of Afghanistan and Russia. NATO adopted a new “strategic concept”, announced the start of a long transition from foreign to Afghan forces (to be completed in 2014) and agreed to build a missile-defence shield in Europe, all the while heralding a new era of amity with Russia (see article).

Then came the summit between America and the EU, an afterthought lasting just two hours, held in a corner of the exhibition grounds hosting the NATO event. President Barack Obama and the two EU “presidents” (Herman Van Rompuy, representing member countries, and José Manuel Barroso, who leads the European Commission) made short statements. …

Yet the reality is that, to American leaders, “Europe” means, first, NATO, then national leaders, and only lastly the EU. A pre-summit newspaper article by Mr Obama was almost entirely about NATO. The EU got a passing mention in a line about NATO’s need to work with other international organisations.

In America’s mind the EU is in essence the economic extension of NATO. Many Europeans dream of inverting this relationship. “NATO should eventually become a military component of a stronger EU-US strategic relationship,” declares a recent pamphlet by the EU’s in-house think-tank, the Institute for Security Studies. This is a pipe-dream, if only because NATO’s membership includes such non-EU countries as Canada, Norway and Turkey. That said, some Americans do believe that the scrawny US-EU arm needs more muscle. A joint paper by eight think-tanks on both sides of the Atlantic last year said that America urgently needed a “strategic relationship” with the EU, “the most important organisation in the world to which the United States does not belong”. As NATO’s main actor, America would rather work through the alliance, or through individual countries. And that, frankly, suits the big European leaders. The prestige of David Cameron, Nicolas Sarkozy or Angela Merkel rests in part on their personal dealings with the American president.  (graphic: Peter Schrank/Economist)