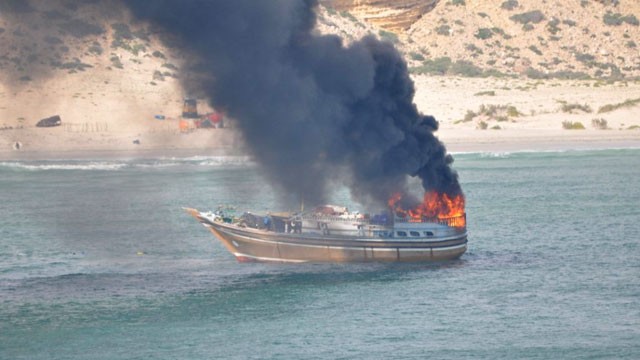 From Luis Martinez, ABC News:  Somali pirates may not be as active as they once were in the waters off of east Africa, but they still pose a significant danger to anyone who crosses their path. As a group of alleged pirates learned today, however, AK 47s are no match for the power of a NATO warship.

Early Wednesday, the crew of the Dutch warship HNMLS Rotterdam spotted a dhow close to the Somali shoreline. Because these kinds of fishing vessels are often used as "mother ships" for pirate crews, a boarding team was routinely dispatched to inspect the vessel.

As the boarding party neared the dhow, the Dutch sailors took sustained gunfire from both the dhow and fighters on shore. The boarding party returned fire and very quickly the dhow ignited in flames and those aboard jumped in the water to escape the blaze. The firefight killed one person aboard the dhow. . . .

The suspected pirates received medical attention and are now being detained aboard the Rotterdam, which serves as the flagship for NATO’s counter-piracy task force off the waters of Somalia, known as "Ocean Shield."

"We know that pirates are increasingly using larger dhows as mother ships. Therefore we routinely inspect them," said Commodore Ben Bekkering, commander of the NATO task force. "In this instance the pirates openly chose confrontation. This does not happen often and it indicates that we are indeed impeding their operations and in doing so, pushing them to take more extreme options."

Somali pirate activity usually decreases during the monsoon period that has just ended, but the drop this year has been especially steep. Only 35 vessels have been attacked so far in 2012 and only five vessels have actually been seized by pirates. In 2010 pirates launched 174 attacks and seized 47 vessels.  (photo: NATO)