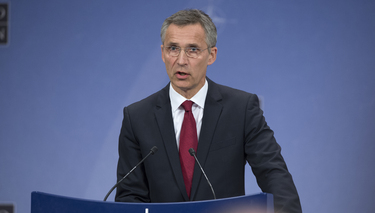 We have just published the Allies’ defence spending figures for 2014, and we have also published estimates for 2015.

This year, we expect five Allies to spend 2% of GDP on defence and these Allies are Estonia, Greece, Poland, the United Kingdom and the United States.

Eighteen Allies are expected to increase their defence expenditure in real terms.

This is good news. But the picture is mixed. Overall, we expect total NATO defence expenditure to continue to decrease in 2015 by 1.5 percent. And this comes on top of a steady decline in especially European NATO Allies defence expenditure during a long period of time.

So we need to redouble our efforts to reverse this trend. Because we are facing more challenges, and we cannot do more with less indefinitely. I will take the question of defence expenditure up with the ministers when we meet on Wednesday and Thursday because this is key when it comes to both following up the decisions we made at our Summit last fall in Wales, but also preparing for the next Summit which will take place in Warsaw in July 2016.