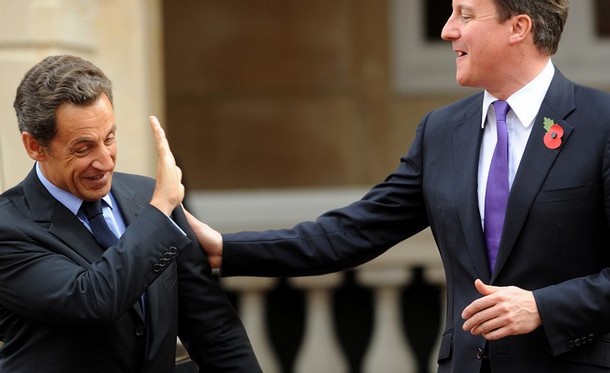 From Andrew Roberts, the Wall Street Journal:  Great Britain desperately needed to sign a 50-year defense pact with a close ally to protect her dwindling military resources and retain the power to project force in the world. A comprehensive deal with a key, trustworthy partner involving nuclear intelligence, aircraft carriers, joint expeditionary forces, satellite communications, cyber-warfare capabilities, and air-to-air refueling and drone technologies has been badly needed given Britain’s vicious defense cuts. The Anglo-French Pact that was signed on Tuesday covers all these areas and more. The only problem is that it was signed with the wrong country.

Just as it did diplomatically at the time of the original Entente Cordiale in 1904, Britain has managed to tie herself into a comprehensive arrangement with a power that is declining militarily even faster than herself. France spends less on defense even than Britain, has only one aircraft carrier to Britain’s two, has at best a revolving-door relationship with NATO’s integrated military structure, failed dismally at its last serious military endeavor (Bosnia, where it effectively sided with the Serbs), contributes far smaller forces in Afghanistan than Britain despite having a larger army, and tried to prevent the liberation of Iraq from Saddam Hussein. (It was General Schwarzkopf who remarked that "Going to war without the French is like going deer hunting without an accordion.")

Only two years ago, a leaked French government document stated that "most" of France’s tanks, helicopters and jet fighters were unusable and its defense capabilities were "falling apart." Yet this is the nation that the British government has chosen to hitch itself to for the next half-century, in a world in which Russia has adopted a 65% increase in its defense budget over three years and is building six new nuclear-powered aircraft carriers and eight ballistic missile submarines, while China is creating a new generation of submarines, stealth aircraft, long-range surface-to-air missiles and guided intermediate-range ballistic missiles. …

It is with the United States of America that Britain should be signing comprehensive, 50-year offensive and defensive alliances, not France, and not out of a niggardly attempt to save money in a world where real perils are ever-present, as the British government’s own Strategic Defense Review recently acknowledged.

Mr. Roberts is a historian and the author, most recently, of "The Storm of War: A New History of the Second World War" (Allen Lane, 2009). (photo: Getty)