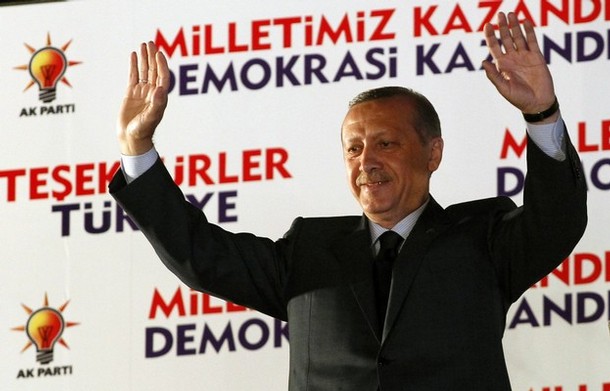 From Deutsche Welle:  Prime Minister Recep Tayyip Erdogan’s Justice and Development Party (AKP) has won just under 50 percent of the votes with over 99 percent of ballots counted in the AKP’s largest electoral victory since it came to power in 2002.

"Today, for yet another time, democracy and the national will have prevailed," Erdogan said from the balcony of his party’s headquarters in Ankara during a victory speech to supporters.

The AKP is projected to win 325 of the 550 seats in the Turkish parliament, with Erdogan headed for his third consecutive term as prime minister. . . .

The secular Republican People’s Party (CHP), the main opposition group, received 26 percent of the votes, a boost from its 21 percent showing in 2007 but lower than the party had anticipated.

"We wish all success to the AKP, but they must remember there’s a strong main opposition party now," CHP leader Kemal Kilicdaroglu told supporters.

The pro-Kurdish Peace and Democracy Party (BDP) won just under six percent of the vote. By fielding its candidates as independents, however, the BDP was able to circumvent the 10 percent hurdle and win around 35 seats in parliament, well above the 20 needed to form a parliamentary group. . . .

AKP members had hoped to win at least 330 seats in parliament, which would have allowed it to call a unilateral referendum on constitutional change, effectively shutting the political opposition out of the process.

It appears now that the AKP will have to find support from other parties to rewrite the constitution, replacing a charter drafted after a 1980 coup that has been criticized for limiting individual rights.

"These elections are not about who wins, but about whether the AKP will win a strong majority to rewrite the constitution," Sinan Ulgen, from the Istanbul-based Center for Economics and Foreign Policy Studies, told the Reuters news agency.  (photo: Reuters)