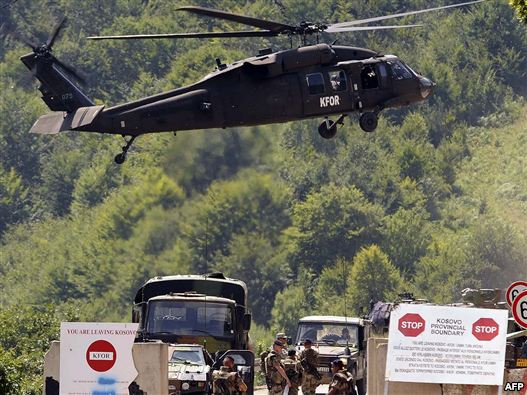 From Angelika Stricker and Sebastian Moffett, Reuters:  NATO plans to refocus its security operation in Kosovo on a mostly Serb northern border region after major contributor Germany said the EU’s police force was "on the wrong track" and placing too great a burden on NATO forces there, officials said on Wednesday.

A tiny part of the northernmost border region is particularly problematic, as about 50,000-60,000 Serbs there reject the independence of the former Serbian province and oppose the Pristina government, challenging NATO and EU troops.

Following the complaint from Germany – with 1,330 security personnel, the biggest contributing NATO ally in Kosovo – NATO’s head said there would be a change in focus.

"I think you will see you will see some rebalancing in the coming months, with a stronger focus on the north of Kosovo," NATO Secretary General Anders Fogh Rasmussen told reporters after a two-day meeting of alliance defense ministers. . . .

German Defense Minister Thomas de Maiziere said he expected a proposal on the revamp in coming weeks from NATO’s Supreme Allied Commander Europe, followed by a decision at the next meeting of NATO defense ministers in February. . . .

Speaking ahead of Wednesday’s meeting, De Maiziere said he would push for EULEX to be completely overhauled.

"Germany is not satisfied with the situation," he told reporters on Tuesday evening. "We need a new start, a new name, a new structure, new people and a new mandate. In any case, it’s on the wrong track. We need to sort that out at the EU level."

EU foreign affairs spokeswoman Maja Kocijancic said that all EU countries, including Germany, had signed off on a revamped, two-year mandate for EULEX just four months ago.  (photo: AFP)