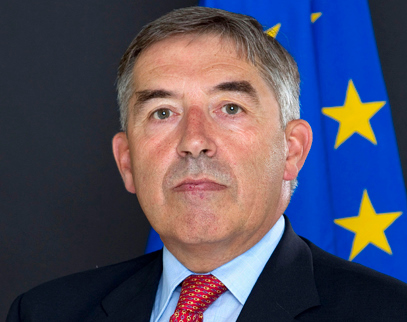 From AFP:   The European Union appointed French general Xavier Bout de Marnhac as the head of its civilian mission in charge of strengthening the rule of law in Kosovo, a statement said Tuesday.

De Marnhac, who had commanded NATO-led peacekeeping troops in Kosovo (KFOR) in 2007-2008, is to replace current EULEX chief Yves de Kermabon in October, according to the statement.

From the Council of the European Union:  Statement by EU High Representative for the Foreign and Security Policy, Catherine Ashton.

"Xavier de Marnhac has the leadership needed to conduct a large rule of law operation in a complex environment. His experience in crisis management and his knowledge about the situation on the ground constitutes the appropriate background to lead EULEX through the next period in which the mission will be facing considerable challenges while continuing to deliver on the core of its mandate throughout Kosovo. I look forward to working with Mr de Marnhac and in the accomplishment of his tasks he will have my full support".  (photo: EU)