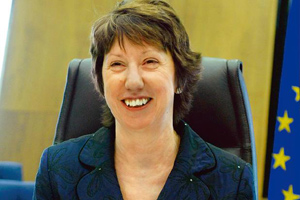 From the European Voice:  The European Union must forge a “stronger, more assertive” and “ambitious” foreign policy agenda to match the rising power of China and India, Catherine Ashton, the EU’s foreign policy chief, said today in a speech to the European Parliament in Strasbourg.

Ashton, in her first address to the Parliament, set out her vision for what the EU’s diplomatic priorities should be in the years ahead…

Ashton said she was considering whether the EU needed to have its own permanent military operations centre as part of deepening defence policy coordination.

“The question is whether the current system, relying on SHAPE [NATO’s military command headquarters] or national HQs, is the most efficient way or whether we need something else,” Ashton said.

She said EU member states had to agree to closer defence co-ordination “to be able to react quickly when there is a need”. Ashton added that she was open to holding more permanent meetings of the EU’s defence ministers to take more security related decisions for the EU and as a way to cooperate more closely with the NATO alliance. (photo: Thierry Charlier/AP)