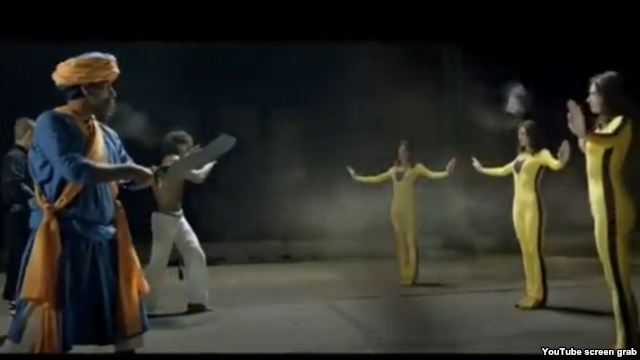 From Rikard Jozwiak, Radio Free Europe/Radio Liberty:  The European Commission has withdrawn an Internet video intended to promote EU enlargement after widespread allegations of both racism and sexism.

The three men include a Kung Fu master from East Asia, a black man practicing the Brazilian art of Capoeira, and an Asian man doing Kalaripayattu moves.

As the three men approach the woman in the center of an abandoned warehouse, she splits into multiple versions of herself, forming a circle around the three men. They appear pacified and drop their weapons as her multiple forms turn into the 12 stars of the EU flag.

The 90-second video, called "Growing Together," was supposed to "communicate European policies" such as the "idea of respect, harmony, and working together," according to EU enlargement spokesman Peter Stano.

Stano says the film was aimed at people aged 16-24 and was supposed to be shown on various social-networking sites. He noted that it received positive reactions when it was first shown to a specifically chosen focus group and that Brussels decided to go ahead with it — but that people from other target audiences disapproved of it once it went viral.

From Stefano Sannnino, the European Commission: The clip was absolutely not intended to be racist and we obviously regret that it has been perceived in this way. We apologise to anyone who may have felt offended. Given these controversies, we have decided to stop the campaign immediately and to withdraw the video.