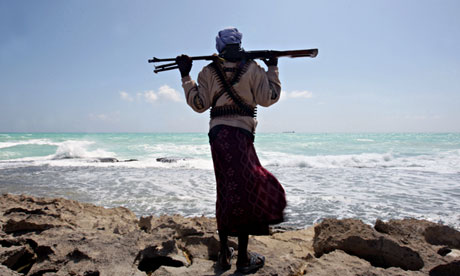 From the Guardian:  The EU is to expand its seagoing anti-piracy mission to include the Somali coastline and waterways inside the country for the first time.

The expansion of the operation appears to herald a significant shift in strategy for a mission that has focused until now on stopping pirates at sea.

EU foreign ministers meeting in Brussels on Friday did not specify what they meant by "coastal territory and internal waters," but officials have said the new tactics could include using warships or helicopters to target pirate boats moored along the shore, as well as land vehicles used by the pirates. . . .

The EU keeps five to 10 warships off the Horn of Africa in Operation Atalanta. Nato has a similar anti-piracy flotilla known as Ocean Shield, and other countries have dispatched naval vessels to patrol the region.

A Nato official said the alliance was revising its rules of engagement with a view to reinforcing them but that actions on land were not being considered.  (photo: Mohamed Dahir/AFP/Getty)