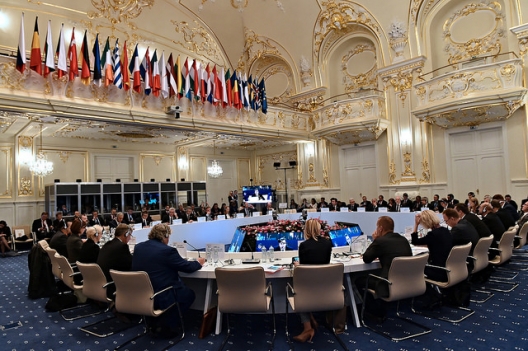 Informal Meeting of Speakers of the EU Parliaments, Oct. 7, 2016 (photo: Government of Slovakia)

EU leaders are to discuss covert Russian funding of far-right and fringe parties in Europe in light of intelligence findings that show that Moscow is interfering in European domestic politics.

Amid deteriorating relations with President Vladimir Putin over Russia’s bombing of Syria, concerns that the Kremlin is meddling in national politics in Europe will be discussed at this week’s EU summit in Brussels.

The EU debate on Russia, scheduled months ago, comes a fortnight after Washington accused Moscow of interfering in the US presidential election by directing cyber attacks on American politicians and parties.

Citing growing anxiety in Europe about Russian financial support for far-right and populist movements, senior EU diplomats told the FT that the intelligence agencies of “several” countries had stepped up scrutiny of possible links with Moscow.

For security and political reasons, intelligence findings are not centrally shared between European member states. But a senior diplomat involved in preparations for the talks in Brussels said there was evidence in some cases to substantiate suspicions of Russian involvement.

“It’s a serious concern. It becomes an existential concern,” the diplomat said. “It’s all about situational awareness. We don’t have the tools to look centrally.”

EU leaders will discuss all aspects of Europe’s relationship with Russia at a private dinner on Thursday, the part of their regular two-day summit meetings traditionally reserved for the most sensitive discussions….

No policy conclusions are expected from the EU summit. Diplomats say the question of any response is riddled with difficulty, not least because of the covert nature of Russia’s activities.