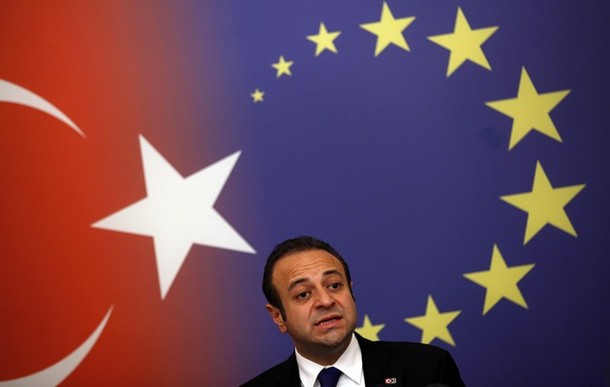 From Kristina Karasu, Spiegel:  In 2004, shortly before the start of accession talks with Brussels, polls showed that 75 percent of Turks still wanted their country to become a member of the EU. Now that figure has plunged to less than 50 percent. "Public enthusiasm for the EU began to wane years ago," explains Istanbul-based political scientist Cengiz Aktar. "The euro crisis has strengthened that trend."

For years,Turkey had been forced to wait at Europe’s gate, but now the country has found a new self-confidence. The government in Ankara has said that EU membership remains a long-term goal, but that it won’t come at any price. "We still believe that Turkey should join the European Union," Turkish Finance Minister Mehmet Simsek said in the fall of 2011, but he added that joining the euro would not be a very attractive option even if, "with its healthy economy and reasonable budget policy, it would certainly be more on the side of Germany than on that of the euro countries" in Southern Europe.

Still, despite its more than respectable growth, Turkey hasn’t been entirely unscathed by the euro crisis. At the beginning of 2012, the Turkish economy grew by only 3.2 percent — a relatively modest figure for an emerging economy. Growth had been hampered by the crisis consuming the EU, Turkey’s most important trading partner by far. More than one-third of all Turkish exports go to the EU. And around 80 percent of all the foreign direct investment made in Turkey comes from the EU.

This has all contributed to an oddly ambivalent attitude towards the euro crisis in Turkey. Seemingly boundless pleasure over the country’s own strength compared to a weakened Europe is mixed with the knowledge that Turkey is ultimately also economically reliant on the EU.

Within the ranks of Turkey’s economic elite, there are few illusions about any sort of independence. Ali Bilaloglu, the CEO of the Dogus Otomotiv, a major automobile importer, describes himself as a "dyed-in-the-wool European." Doing trade with Europe is part of his daily agenda, too. Bilaloglu’s some 2,000 employees import car brands like Volkswagen, Audi and Porsche to Turkey.

The company has been indirectly touched by the crisis. Turnover of Turkish products in the EU is falling and that, in turn, is weakening the Turks’ purchasing power. "We don’t have negative figures, but there is less growth," Bilaloglu says. "If Europe were healthier, then Turkey could grow faster."  (photo: Reuters)