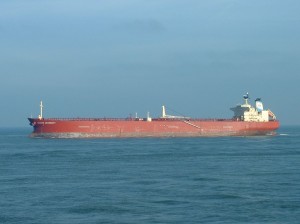 Swedish Rear Admiral Jan Thornqvist, one of the Operation Atalanta commanders, told journalists in Kenya that the crew had locked themselves into one of the cabins as soon as the pirates hijacked the tanker. The pirates approached the Russian vessel in one motorboat, he said. However, the captain of the Moscow University said, according to the vessel‘s owner, that two small boats carrying armed pirates tried to approach the tanker and fired shots at the ship with automatic weapons.

The Moscow University, which is carrying 86,000 tonnes of crude oil, was heading for China and was expected to arrive there on May 17. The vessel‘s crew is made up of 23 Russian citizens.

The tanker‘s owner is in touch with the Marshal Shaposhnikov warship which is now rushing to the area where the Russian vessel was seized.  (photo: EU NAVFOR)