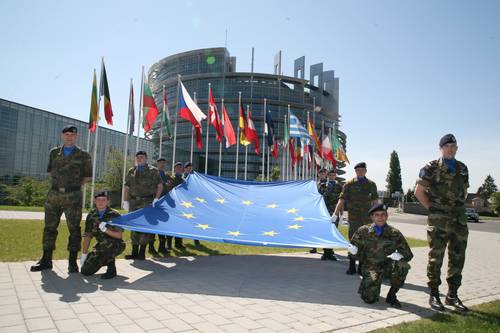 From Judy Dempsey, New York Times:  Germany and most other E.U. countries still do not think and act strategically when it comes to strengthening Europe’s foreign and security policy. And if they cannot even do that, how can they react to Washington’s changing strategic priorities?

“Apart from a very few countries, such as France and Britain, the Europeans have been very complacent about strategic affairs,” said Rem Korteweg, defense expert at the Center for European Reform, a research organization in London. “It’s as if the world outside does not affect them.”

This is confirmed by a new study from the European Council on Foreign Relations that analyzed the national security strategies of the 27 member states. Olivier de France, one of the authors, said the strategies showed that there was no common purpose or common strategic culture that could give Europe’s foreign, security and defense policy substance. “There is no shared ambition about Europe as a global player or about the allocation of defense resources,” Mr. de France said.

Many of the national strategies reveal parochial attitudes toward security. This is despite the fact that Europe’s southern neighborhood has fundamentally changed since the Arab Spring, China is a major economic power, and the United States believes it’s time Europe took responsibility for its own security. . . .

If the Europeans were serious about responding to the changes taking place in its neighborhoods and in the United States, then national governments would at least agree to write a new security strategy.

The first one was 10 years ago. Yet Catherine M. Ashton, Europe’s foreign policy chief, opposes writing a new one, fearing huge disagreements. London and Berlin are hostile to the idea, too. Britain would have to discuss its role in Europe, and Germany would have to deal with Europe’s relations with Russia.

These attitudes bode ill for next December’s E.U. summit meeting on defense, the first one in eight years. “The expectations are already being lowered,” Mr. de France said.