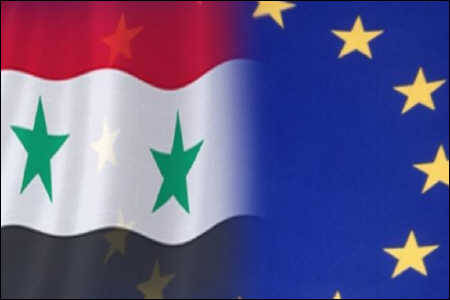 From the Council of the European Union:  In response to the ever increasing violence in Syria, the Council today strengthened the enforcement of the EU arms embargo against Syria.

EU countries will be obliged to inspect vessels and aircraft heading to Syria if they suspect the cargo contains arms or equipment for internal repression. This obligation applies in
member states’ seaports and airports as well as in their territorial sea, in accordance with international law. Items that may not be exported to Syria under EU law must be seized. In
addition, aircraft and vessels heading to Syria will have to provide additional pre-arrival and pre-departure information on their cargo.

EU High Representative for Foreign Affairs and Security Policy Catherine Ashton said: "I am deeply concerned at the escalating violence and its tragic consequences for the Syrian
population. The EU has warned against a further militarisation of the conflict. Today we are taking practical steps towards limiting the supplies that fuel the fighting."

The EU embargo on exporting arms and equipment for internal repression to Syria has been in force since May 2011. It is also prohibited to provide grants, loans, export credit
insurance, technical assistance, insurance and reinsurance.

The most interesting step is a new inspections regime aimed at tightening Europe’s arms embargo on Syria by stepping up oversight of planes and ships headed to the country. But how will it work? . . .

First, what evidence is needed for a member state to have to act on the suspicion? Officials have thus far been silent on what will count.

Second, what happens if the member state doesn’t have the capacity to carry out the search? (A possible example could be the Cypriot navy’s ability to police a Russian ship heading through its territorial waters). The EU was silent on this Monday but diplomats said last week this was a key point of contention when member states debated the measure.  (graphic: WRNEWZ)