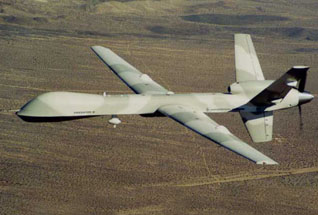 From Bill Gertz, Inside the Ring:  The Pentagon is studying how to expand the use of highly effective combat drone aircraft from the Middle East and Southwest Asia to other commands , including Pacific Command and Africa Command.

A special task force at the Joint Chiefs of Staff is conducting the assessment in anticipation that the concentrated use of armed and surveillance remotely piloted aircraft, namely Predators and Reapers, in Afghanistan, Pakistan and Iraq will decline in the coming months as U.S. forces draw down from those theaters, according to a Pentagon official.

Two commands likely to get more drones are the Pacific Command and Africa Command, the official said. The Pacific Command is building up its forces in the face of China’s large-scale military buildup. Pacom also must deal with continuing tensions caused by North Korean military provocation.

Africa Command, too, is in need of drones after its rise to prominence during the recent Libya operations in support of anti-regime rebels.

Other commands interested in drone systems are the European Command and the Southern Command, which is focused on Central and South America.

Currently, the drones are key weapons for finding and killing al Qaeda members and other terrorists in the Middle East and Southwest Asia, including Pakistan and Afghanistan. . . . .

The Pentagon is building up its Predator and Reaper drone forces from 53 aircraft deployed this year to 65 in 2015, when it plans to have 33 Predators and 32 Reapers in use, backed with a force of up to 12,000 people. Funding for drones will be $4.8 billion this year, about the same as last year.  (photo: General Atomics)